Heirloom Audio Productions created an audio drama based on a G.A. Henty novel, Under Drake’s Flag. Glenn Beck says it is phenomenal. I agree. The actors know how to make the characters sound authentic. Their British accent adds a touch of professionalism and authenticity, as well.

George Alfred Henty, known to most people as G.A. Henty, wrote dozens of historical novels. This audio drama takes us into the world of Ned and Gerald, two lads who come of age as they voyage with Captain Drake’s crew on different adventures.

It is an adventure at sea, on land, and in the dungeon of the Spanish Inquisition. It is also the story of two young men, friends, who grow up together under the leadership of Captain Drake. Last but not least, this audio drama shows listeners the power of making wise choices. 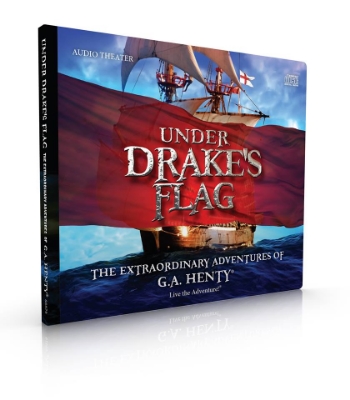 A bit of romance helps make this thriller a bit more palatable for lady listeners, I think. Ned rescues a damsel in distress – literally. She is a Spanish lady – Donna Anna. They eventually run into each other again and, slowly but surely, develop enough affection for each other to get married.

But don’t be alarmed. The romance is very much rated G. When she gives him a kiss on the cheek, she calls it an item for his trip. Gerald also asks for an item, but Donna Anna simply laughs it off. Later, when she calls Ned a “poor boy” and plants another item on his cheek, Gerald says, “I’m a poor boy, too…” Again, Donna Anna laughs and shows her preference for the brave young man who saved her from the sharks.

This product comes in two CDs. The booklet contains the short version of the Study Guide. Yes, you can reinforce the listening by using a Study Guide, available online here. Whether you do this orally or in writing depends on your child’s handwriting level.

There are three parts to each set of questions:

At the end of the Study Guide, you will find three Bible studies about character. I really like this whole setup and, even though I have not used it with my kids, because they are still too young, I plan to use it in a couple of years. Definitely one of the best materials I have come across for making Biblical principles practical and real for our lives in the 21st century.

The 2-CD set costs $29.95 and is intended for ages 6-adult. Even my four-year-old liked it, although she got lost in the plot a bit. We listened to Under Drake’s Flag in the car on our way to Knoxville, which is about one hour from our house. Some of the scenes get a bit intense and loud, especially the fighting scenes, but not enough to put us off.

It helps that you don’t see them fight, I suppose. And you can always adjust the volume. You don’t have to worry about language, either. The whole thing is as clean as a whistle.

We will probably listen to this audio drama again and again, especially on long trips. I look forward to the kids’ being older, so we can delve into some of the topics introduced, like the Spanish Inquisition, and do some map work following Ned’s trips.

My kids picked up “En garde!” from it – a rather pleasant surprise. Since I teach them French, I was more than happy to explain the term. I even demonstrated the position with an imaginary sword. And now you have a visual…

Finally, I must include here the prayer of Sir Francis Drake. If you have lived long enough to go through sorrow and joy, if you have reached some goals and failed in others, this prayer will speak to your heart. Have the kids memorize it. Include it in their copywork. We will.

The Prayer of Sir Francis Drake

Disturb us, Lord, when
We are too pleased with ourselves,
When our dreams have come true
Because we dreamed too little,
When we arrived safely
Because we sailed too close to the shore.

Disturb us, Lord, when
with the abundance of things we possess
We have lost our thirst
For the waters of life;
Having fallen in love with life,
We have ceased to dream of eternity
And in our efforts to build a new earth,
We have allowed our vision
Of the new Heaven to dim.

Disturb us, Lord, to dare more boldly,
To venture on wilder seas
Where storms will show Your mastery;
Where losing sight of land,
We shall find the stars.

We ask you to push back
The horizons of our hopes;
And to push back the future
In strength, courage, hope, and love.

This we ask in the name of our Captain,
Who is Jesus Christ.

One thought on “Under Drake’s Flag Review”