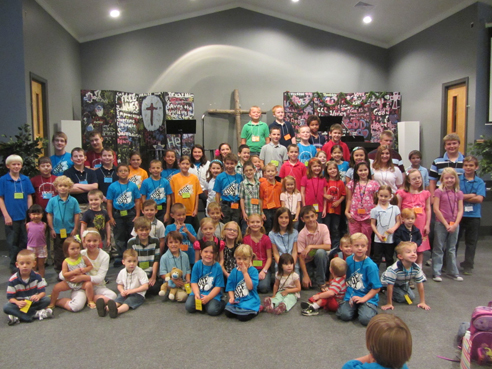 My children and other EDGE students on their first day of homeschool co-op, August 2012. My children were only two and four at the time – how time flies.

I attend the Sevier County Homeschoolers’ monthly Parent Support Night and it helps me so much. There’s something to be said about socialization, you know? I say that tongue-in-cheek, of course.

We bring some food, share a few things that happened in our homeschools, ask a few questions, get some answers, have a devotional, and win a door prize (or not). Good ol’ fellowship with like-minded moms while the kiddos are at home with their dads goes a looooong way.

These are my people. Homeschooling moms.

When I meet a homeschooling mom, we have an instant connection.

We dig each other.

We know how it feels to put our noses to the homeschooling grind every morning.

Homeschooling moms must have a support group to get started, to keep going and to successfully reach the finish line, a.k.a. graduation.

That’s why a support group is my #3 homeschooling essential. Check out some more essentials from my friends on the TOS Review Crew:

Laura @ Day by Day in Our World

DaLynn @ For the Display of His Splendor

Lori @ At Home: where life happens

Last week, we took not one, not two, but three field trips. We are involved in three homeschool support groups. We pick and choose different activities each group does based on our interests, ages, and calendar.

It just so happened that last week all three groups organized a field trip we were interested in. I will tell you all about them in the next three blog posts, this being the first one.

We went to the TVA Fair in Knoxville for a program called “Down on the Farm” with our Blount Home Education Association (BHEA) support group. For this particular event, 234 participants signed up. Yes, that was a large group. Glad I was not the organizer.

Once I registered online for this field trip, I received the instructions:

(2) say the magic words “Down on the Farm with BHEA” wherever there is a checkpoint.

It worked. We got in for free. Past the entrance, we simply looked for someone holding a “BHEA” sign and followed them. 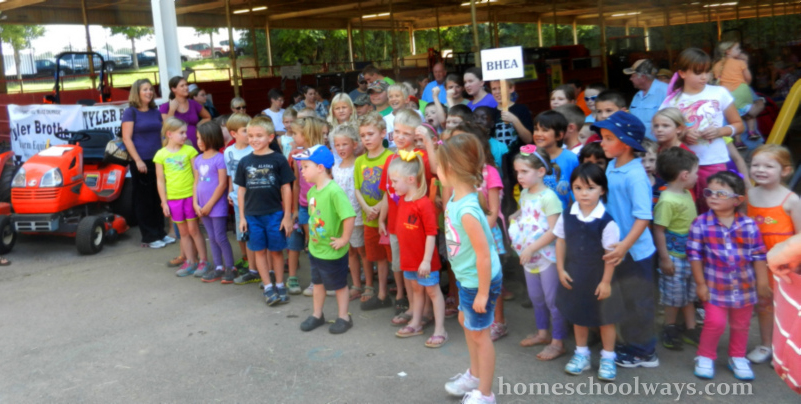 After we got seated in the arena, a very funny juggler entertained us. Then, one of the cows gave us an elimination show. It was so intense, the kids in the lower levels almost got splattered. They quickly moved out of the way.

The organizers split our large crowd into ten smaller groups simply by bringing in ten fair staff holding a number sign. The closest sign to us was the number of our group. Somebody gave a signal somewhere. The people with number signs started walking.

We followed our leader. Each small group was lead to a teaching station. When the whistle blew, we moved to the next station. We felt a bit – well – herded like cows, but hey, it worked and it moved us from point A to point B.

It was hot and dusty, tiring and, at times, boring. But, overall, they had fun and learned a few things. 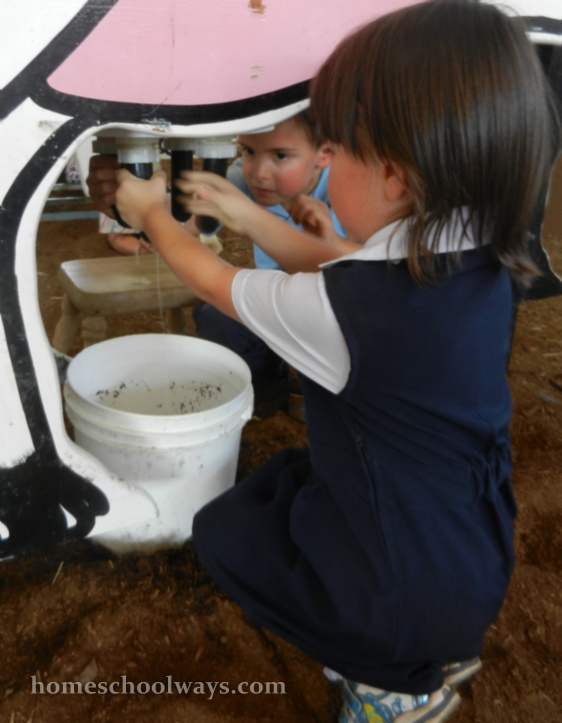 The fair staff were middle school and high school students from different area public schools, private schools and homeschools. I was amused when an elderly lady asked the girl at the sheep pen, “Did you kids have to get out of school today to do this?”

The answer came respectfully, “We homeschool, so this counts as school for us.” The facial expression of the lady who asked the question spoke volumes about the clash of concepts that had just happened. She was stunned. All she could say back was, “Oh, OK.”

I get that older generations in particular have a hard time accepting homeschooling, especially if they grew up attending quality little schools. I just wish the older generations could keep an open mind about, well, anything, including educational choices. And that they could be as gracious as this lady, no matter how weird homeschooling sounds to them. Wishful thinking… I linked this post up to

I just got back from registration night for the 2013-2014 homeschool year in Sevier County, so this blog post is fresh off the WordPress press. We met at Victory Baptist Church in Sevierville. We registered as homeschoolers and received our ID cards. The coordinator, Sabrina Gray, opened the meeting with prayer and a few remarks about our goal of instilling godly character in our children. Then, she introduced some of the vendors and activity leaders.

She surprised me by asking me to come upfront and share about my blog. Afterwards, several ladies with small children walked up to me and asked for the name of my site again. I was excited to share, obviously, and hope they will sign up for updates. I am honored to serve the homeschooling community through this blog.

A paragraph about Sabrina: she is such a neat lady with a beautiful story of homeschooling three children through the tough times, in the early nineties, and now. A talented artist, a writer and an actress, a quilter and a storyteller, she can also bake some seriously delicious bread. Back in May, we were in her home for a bread-making workshop and her husband shared how he went to Romania in 1992 to give Bibles to people. Coincidentally, 1992 was the year when I decided to follow Christ and the Bible. We all cried as we traded stories of how God used different people like him to bring the gospel to Romania. 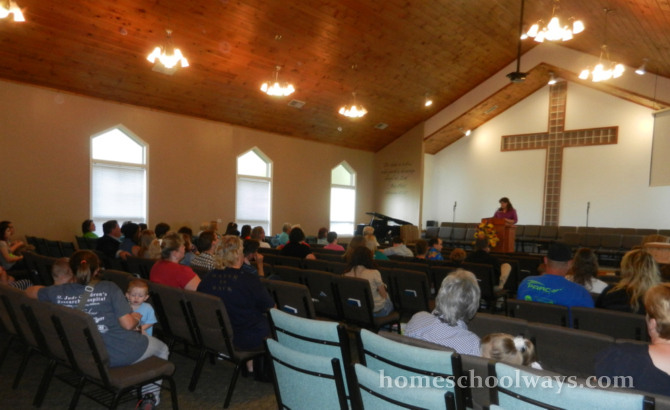 The Sevier County Homeschool Support Group offers so much: 4-H, choir, Keep Sevier Beautiful, the Passion Play, several activities for highschoolers, quilting classes, parent support night, just to name a few. My children will try the choir. For myself, I will attend the parent support night. I felt encouraged every time I attended last year.

The homeschooling family Sabrina invited to speak are engineers by profession and the parents of four children. I expected them to be informative, but they were also funny. Who would have thunk it? The mom used to be the president of her company when God called her to homeschool her children. He is still an engineer with the Oak Ridge National Laboratory. Their older children got accepted into all ten colleges they applied for and six of these ten colleges offered them a free ride. Intrigued? I will pass on to you their twelve pointers about homeschooling in a future blog post.

All in all, it was a great night of networking. It was good to see old friends and make new friends. Homeschooling is an exciting adventure and being plugged into a support network makes it even more fun. My suggestion is that you find a support group wherever you live. You will need them in good times and tough times alike.

You have decided: you will homeschool. Now what?

Let me say this: if the “why” is big enough, the “how” will follow. In every aspect of life. Homeschooling is no exception.

Researching how to get started takes time. Don’t let it get you discouraged. Take it in stride.

Here is a checklist for you to follow, based on what I did:

1. Find out the deadline for registering in your school district. This determines how much time you have to do research and it will keep you focused. I had eighteen months, but a friend of mine said, “That first day of kindergarten will be here before you know it.” She was right.

2. Familiarize yourself with the law in your state. The HSLDA website should give you a great start to this process. There, you can locate your state’s homeschool organization and work with them directly. Whatever you do, don’t rely on word of mouth. Do you own research.

3. Plug into a support system – locally, there should be a homeschooling group you can call upon with questions. These families are usually generous with their time and knowledge, but you must remember that they will tell you what their experience has been. It may or may not apply to your family. Weigh the answers.

4. Gather up all the documentation needed to register. Depending on what you find in the previous steps, you might need a lot or a little. While you’re at it, get organized. Prepare a file strictly for the legalities of homeschooling and keep it where you can easily access it. Guess what? You would have to take this step even if you put your child in a traditional classroom.

5. Read up on homeschooling approaches, curriculum choices and learning styles. Get used to the lingo. Don’t get intimidated. It’s not as complicated as it sounds. This friend of mine told me about her first days of homeschooling: “I kept asking myself, ‘What do I do?'” She had the jitters. She also had a master’s degree in education and several years of classroom teaching experience. It is normal to feel nervous, but don’t let nervousness stop you from enjoying this exciting time.

Even if you are short on time, read the first few chapters of Cathy Duffy’s “101 Top Picks for Homeschool Curriculum.” Do you have to read all the reviews? No, you don’t. Thank God. That’s the beauty of this book. Do your homework in the beginning of the book and then you will only have a handful curriculum choices to review.

6. Get curriculum, either new or used. Get school supplies. Don’t shop till you drop. Newbies usually get too much. Rainbow Resource Center, Amazon and homeschoolclassifieds.com are great places. Your local bookstore might have a homeschooling section. Visit the bookstore to hold the book in your hand before you order it online. Used curriculum fairs happen regularly in your area. Check with your local support group.

7. Plan your school year or, at the very least, the first month of teaching. Donna Young will help you there with free planners, lesson plans, nature journals, notebooking pages and any other type of form you can think of. Did I mention they are free? Notebooking Pages might be of interest, as well.

8. Sign up for newsletters and magazines. These resources can get overwhelming. I signed up for three magazines, for instance, and realized I only read two of them. Also, if you find they do not fit your homeschool, unsubscribe. Look for a better fit. Homeschooling happens in so many ways. You will eventually find your style and your clan in the beautiful world of homeschooling.