Because of my European background,  I want to raise polyglots even though we live in the United States. It helps that I homeschool – it gives me time to speak and read to them in different languages. If they went to school for seven hours a day in the majority language (English), it would put every other target language (Romanian, French, Spanish) at a huge disadvantage.

I focus on Romanian and French for now. I decided I would add Spanish to the mix only after we get a grip on these two. Their daddy is American, so it’s all English with him.

So here are my Top 10 strategies for raising polyglots:

1. I spoke to them in the target language from birth. When others around us must understand my conversation with my children, I switch to English. Even though I live and homeschool in the US, I use Romanian as the language of instruction as much as I can. I repeat new concepts and vocabulary in both Romanian and English to make sure they get it.

2. I read to them in the target language at least 20 minutes a day. At first, I translated from English into Romanian. As the books got more complex, I switched to reading in English from English books, in French from French books and in Romanian from Romanian books.

3. We sing and listen to music in Romanian and French. While they play or eat, we turn it on in the background. They really like it. I point out some words if they are interested.

4. We Skype regularly in Romanian with my family or friends. Any French-speaking kids out there that we can Skype with?

5. I brush up on my own language skills by reading books, newspapers and blogs in French (or other languages). I listen to the news in French.

7. My children stumbled upon Fireman Sam in French and Robocar Poli in Korean on youtube. They even found Postman Pat in Dutch. When a character is hanging on a cliff yelling HELP in another language, they get it. Caution: TV viewing harms small children’s brain. My children are three and almost six. We only allow them 30 minutes daily, if at all.

8. We look to make friends with people who speak French or Romanian in our area. It’s tough though. But I keep hoping.

9. When the children get older, we will take them on trips to Québec and France.

10. Once my children can write, we plan to find them pen pals. Hopefully, my community of multicultural bloggers will hook me up in a few years (hint, hint).

I take teaching languages seriously, but I’m relaxed about it. Children don’t need pressure. Through it all, I am thankful that homeschooling allows me the time to accomplish my goal of raising polyglots in the good ol’ USA. 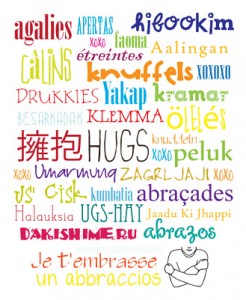