We were disappointed to find out the social distancing had to be prolonged for another week, but we went for it. Praying for all those affected directly by COVID-19, we pressed on with our homeschooling and tried to make the most of our time at home.

We camped in our backyard to relieve the cabin fever.

Both my children have finished their math books, so we are reviewing a lot of material right now, before starting on higher grades. In language arts, they finished their test prep books. I discovered they both lacked grammar notions that I have taught them. END_OF_DOCUMENT_TOKEN_TO_BE_REPLACED

Earlier this year, while my son and I were doing math, my daughter asked to do math, too. He is five. She is three. I use Singapore Math Earlybird Kindergarten with him and I really like it, by the way. But alas, Singapore Math does not publish a preschool workbook. What’s a homeschooling mother to do?

For a while, I printed worksheets for my daughter from the internet. When I got tired of it, I investigated around and found the Rod & Staff Preschool Workbooks. They come in two series: one for ages 3-4 and the other for ages 4-5. Since my son was still in preschool (technically speaking), I ordered both series.

My daughter loved her workbooks from the start. She finished one in two sittings. It was almost scary. She kept turning the page saying, “One more.” 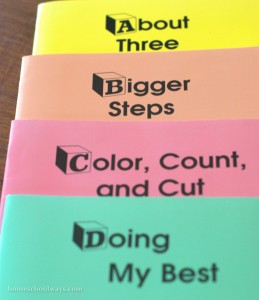 Rod and Staff Workbooks for ages 3-4

She seems to be a natural pen-and-paper learner but, of course, she still likes hands-on activities, too – and we do plenty of those. As a younger sibling, she has been learning new concepts by osmosis on a daily basis. I work with my son and she plays nearby, within earshot. She absorbs information without realizing it.

I was amazed at how much she already knew as we worked through these booklets. The whole experience felt like a review of material I never covered with her. But it did not feel like a waste of time. We practiced important study skills like following directions, working on a page from top to bottom and from left to right, and stopping when the attention span wanes.

It also felt like the perfect way to ease her into the role of student and me into the role of teacher. For three years, I have been mommy. Now I am her teacher, too. We uncovered a new layer in our relationship.

The publishers have included cut and paste activities throughout, not just matching, drawing lines, coloring and tracing. The black-and-white format does not catch the eye, but it does the job. My daughter never objected to it in the beginning. However, after a few weeks of sitting next to her brother, who was working through his colorful Singapore Math workbook, she asked for a book “like his.” I told her she would get one “like his” when she gets to kindergarten.

I believe three-year-olds are too young to trace neatly. We skipped the tracing pages or, if she asked me to do it, I traced to show her the motions, by saying out loud, for instance, “To make a one, we go from top to bottom.”

As to my son, the workbooks for four- and five-year-olds never appealed to him, probably because (1) they were below his level and (2) Singapore Math offers tactile practice before asking a young child to show understanding of an abstract concept with pen and paper. So my daughter may inherit the Rod and Staff books for the next level.

Don’t you just love homeschooling? Things don’t always go as planned, but they work out in the end.