The second homeschool field trip we took last week was to the Exotic Petting Zoo in Sevierville. Of course, there’s always an incident when children visit a petting zoo. Two years ago, a camel nibbled on my son’s hand while he was feeding it. This year, my daughter got licked by a huge white horse which stretched over the fence to get to her head. It scared her and she cried, asking to leave right away. 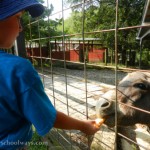 My son feeds a donkey 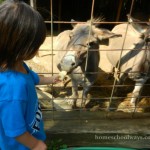 My daughter feeds a donkey

My son started crying too, being afraid for his sister. I calmed them down by taking them to the zebra and emu area. They continued to have fun and even mustered enough courage to go inside the goat pen. I sent them in with my mom, because – how can I put it? – I am not exactly a goat pen fan. But my mom grew up on a farm and she enjoyed it. 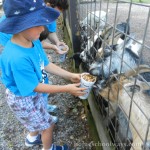 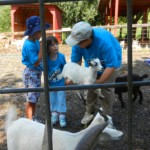 My mom and children in the goat pen

However, when the children got pony rides, guess who had to hold the reins? My mom was afraid the ponies might kick the children off and she would not know what to do. I was “it” by default. Challenging, but I rose to the occasion.

The little tutorial they gave me in the beginning helps. They mentioned the ponies knew what to do. If they stopped, I was to pull gently on the rein.

They gave my son the biggest pony. After two rounds, when it stopped, I pulled on the rein to get it to go. It did not move. I looked at its back and realized what was happening. I explained to my son the pony was relieving itself and we waited patiently. 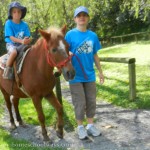 My son riding a pony 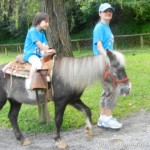 My daughter riding a pony

The smallest and oldest pony, age 22 ½, was deemed appropriate for my three-year-old daughter. It did fine for a bit, then it wanted to nibble on grass. I yanked the rein and it obeyed me. I got more confident and ended up enjoying the experience. I even wrote my next newspaper column in my head while I walked the course three times with each child.

Which made me think that walking a pony with a child on it is a lot like raising and homeschooling that child: scary, unpredictable, challenging, involving food and its elimination, and, well, sometimes you have to yank the rein gently to keep them on the right track. In the process, if you can relax, you can have fun and do some writing, too. This post is linked up to