We read some of the books recommended. My local library did not carry these particular titles, but they got them for us in about a week through the inter-library loan program. Meanwhile, the children’s librarian brought us similar books which they did have. One of them actually had the same title as the one recommended by Susan Wise Bauer, i.e. “Ancient China,” and it made it confusing later on as I was returning both titles.  END_OF_DOCUMENT_TOKEN_TO_BE_REPLACED

They are bilingual to start with, so why not add a few more languages to their repertoire? Enter Mango Languages, an online language learning program. Featuring 60+ languages, the Mango Homeschool Edition can help your homeschoolers pick up a language by immersion. I like the fact that they employ native speakers. You can really tell the difference. 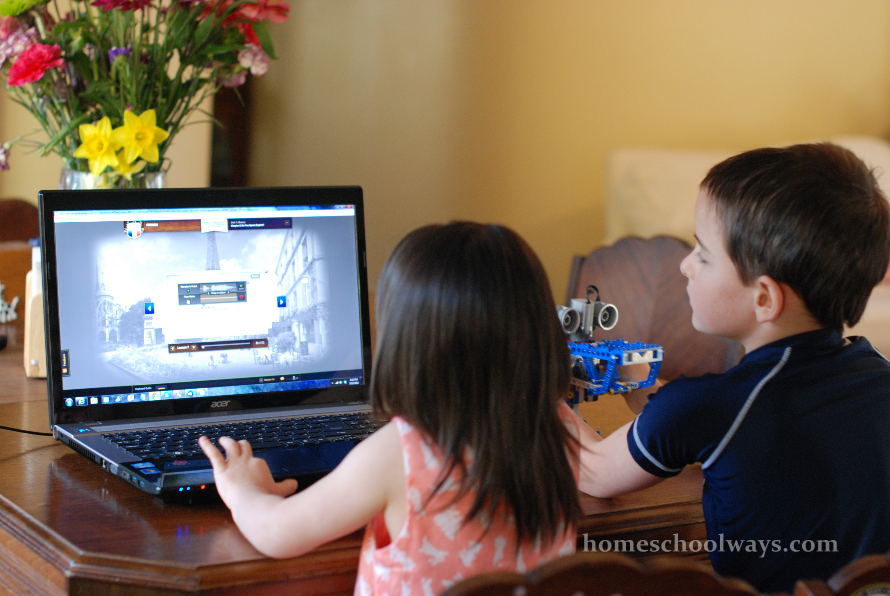 My son and daughter loved the recording feature of Mango Languages. They got really silly with it, but I allowed it because I remember acting silly when I first took language lessons, too.

Once you decide which package will work for your family and purchase it, they will provide you with login information for every student. Of course, parents can learn, too. My children are taking French, Spanish, Latin, and Romanian. I am studying Italian and brushing up on my Latin.

Here are the price packages available:

Anything over 6 subscriptions is a special group rate that will depend on the number in the group. As far as homeschool curriculum goes, I think these prices are more than reasonable. The question is, once you have it, will you use it? That’s always the question, whether it’s a backyard pool or a book you bought at a seminar or a subscription to language learning online. But I digress.

Personally, I am already trying to immerse my children in other languages. As we live our lives, I speak to them in Romanian. When daddy is around and he has to understand what I am saying to the kids, I switch to English. However, I read to the children in English, Romanian, French and Spanish, depending on the books they pick. I also mention to them several things in French and Spanish as we go through the day.

It’s really random, as these idioms strike my fancy. So I used Mango to organize our language instruction. The kids loved it in the beginning. It was a new experience. It was computer time. They don’t get much screen time (TV or computer) because I don’t believe it is good for their brains. Besides, they will spend their adult lives in front of screens, so I want their early school years to be as low-tech as possible.

Over time, they started getting bored with it. Mango Languages is pretty much a set of virtual flash cards that get repeated so you can get drilled. By repetition, you can store up vocabulary in your long-term memory. You know what they say, “Repetition is the mother of learning.”

This is the screen you should see once you are logged in. The directory of languages looks impressive, doesn’t it?

I love Mango Languages because I am motivated to learn languages. But, if the why is not strong enough, the how will not follow.

That’s where the going gets tough. Do you have the mental fortitude to continue, once the newness wears off? With my kids being so small, I did not enforce instruction if they did not want to do Mango Languages on a particular day.

Even so, I dare say they learned quite a bit. And so did I. If nothing else, all this language immersion, whether by me, at random, or systematically, through Mango Languages, has trained them to wonder how we say something in another language. Now and then, throughout the day, they ask me, “How do we say this in French (or Spanish, or Romanian)?” You know they want to learn when they ask questions.

I first thought we should study only French and Spanish. Then, I thought I should look into Latin, as well. Just to show them how close it is to Romanian and some of the things they already know in French and Spanish.The children asked for Romanian, too, taking me by surprise. It was fun to sit there and listen to my mother tongue being drilled into my children. As if they don’t get enough of it daily. But it was neat for them, I think, to get Romanian from somebody other than mommy.

Personally, I appreciated the grammar notes. I love grammar, so any bit of grammar I get helps me with my database of knowledge about what is or isn’t acceptable in a language. The other thing that I took great pleasure in was the explanations of the literal translation in different idioms.

We say, “What’s up?” in English, but nobody looks up when you ask them that before they answer you, for instance. The same goes for other languages. Knowing the literal translation helps with creating the sentence – at least, for me. It also fascinates me to see how different cultures view the world. Where the English ask how you are, the French would ask how it is going, while the Romanians ask, “What are you doing?”

I suspect the same is true about other languages. I noticed it in French. Regardless, there is a lot of learning that goes on and, should you learn one way of saying things, you should count yourself blessed. At least, you know one way of expressing yourself in a different idiom.

There are tests and there is tracking coming up as they continue to develop this software. Personally, I am in awe of this whole experience, even in its beta version. One thing I have not done is get in touch with other people who study the same languages. There is a community with chat rooms one can take advantage of in the software, if you should feel so inclined.

Since my children are only four and six, I need to be there for technical support, for guidance, to help them navigate the different screens and to help with any questions. Older students would not need their hands held through the process though. The software is intuitive. The product is intended for ages six through adult.

By far, the best aspect of using Mango Languages for my children was the recording feature. The student listens to a native speaker pronounce a phrase. Then, the student can record her own voice pronouncing the same phrase. One can play both recordings simultaneously to really listen for differences in syllables, accent and pronunciation. My kids loved that feature.


Here are the social media links for Mango Languages:

What: My Father’s World Curriculum Expo, i.e. a free opportunity to take a look at their curriculum. A staff family will answer your questions and take orders.

How: Register for the event and receive your $10 coupon. Click on the button below.

During the pre-registration process you will also have the opportunity to share this event with your friends on social media.