The Ancient Phoenicians, chapter 15, has been a convoluted chapter for us. First off, I remembered Carthage from when I studied Ancient History in the fifth grade and I looked forward to it. But we went skiing instead, as a family, the day we were supposed to cover this chapter.We called it a P.E. day.

Secondly, every time I tried to play the chapter in the car, to make up for lost time, the kids did not show an interest. I did not have the energy to enforce learning time (car schooling). It does take energy, at least for me, and some days I have it in limited supplies.

Thirdly, the weather has made the roads so bad, the library has had irregular hours and they have not been able to procure my ILL titles to read about this chapter this week. 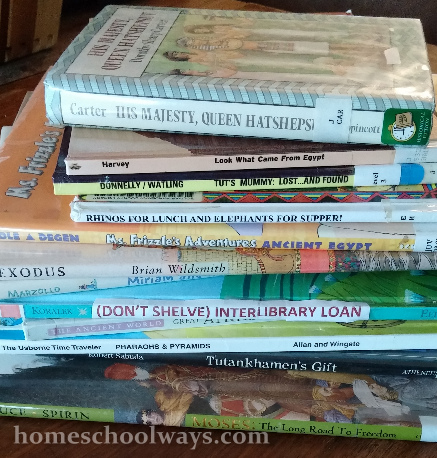 Our stack of 12 books from the library, to catch up on our history reading

But we persevered, despite more seeming setbacks.

The other day I got a screw in one of my car tires, and spent two hours in a mechanic’s waiting room. They were super busy because, as fate would have it, two of their guys quit that day. They did not charge me anything for patching the tire, because of my wait. I insisted I wanted to at least pay for their expenses. I told the shop owner I understand “overhead” and that I feel bad for not paying for something. He said he felt bad I had to wait for two hours.

Well, I had brought my knitting with me and it was not a total loss of my time. Of course, I was there with the kids. My son had brought a LEGO magazine to read and my daughter had her Hello Kitty coloring book and crayons.

Something happened inside of me while waiting there. On the way home, despite their protests, I told them gently that we would listen to Chapter 15 after all; that it was a short chapter and, afterwards, we would listen to Wizzy Gizmo, which was their initial request. They love Wizzy Gizmo… but we need to do our history lessons as well. And we did. I have said it before, these CDs are worth it.

When the library finally called me that they had my ILL titles, I drove over there and brought home 12 titles from our previous lessons. We are catching up with reading from previous chapters.

One project I want to do for the Phoenician chapter is the bread recipe, but there is no way I can do it this week. I have to prepare my daughter’s birthday party on Sunday.