This summer, my children have really enjoyed listening to an audio drama called “Who Created Everything?” produced by Wizzy Gizmo. In fact, they ask for it every time we get into the car. Sometimes we get back home from our errands and they stay in the car to listen to it to the very end – as if they have not listened to it before.

This audio drama, all on one CD, features two girls and two boys who hang out with a scientist named Wizzy Gizmo, whom they call Wiz. One of the boys is new in town, and the other three kids make him feel right at home as they invite him to their adventure.

I liked the value instilled in kids as they hear the characters say, “He is new in town.” “Sweet! You gotta come with us!” So being new somewhere is not weird and scary. New people should be welcome and included in our activities. 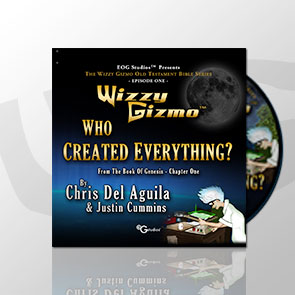 The four friends go to Wizzy Gizmo’s lab, where they also interact with his two sidekicks – a robot duck called Quackie and a Mexican dog named Pepe, who speaks with a thick Hispanic accent. Wizzy’s new invention – the Gizmoblaster – is a machine that creates a lifelike world based on any book you read.

It’s the same idea as in many other children’s books or movies, i.e. a time machine of sorts which can take you places in time and space. The kids decide to go all the way to the week when everything was created.

Wizzy walks them through what the Bible teaches about how God created everything. The kids learn and react to information. When Wizzy tells Eli, the new boy in town, that Eli picked an auspicious day to visit his lab, the kids ask, “What does auspicious mean?”

Quackie provides an answer in a rap song which reveals his ignorance. He thinks auspicious is something delicious and nutritious. “Slice it, dice it, give it to me fried…” Pepe explains the real definition of the word after the kids tell Quackie that he is wrong.

Pepe and Quackie seem to balance each other out throughout the audio drama. Pepe tends to be more realistic and informed, while Quackie is whimsical bordering on weird.

The kids sing songs here and there and so does Wizzy Gizmo. At one point, Wizzy sings a song about how much he loves mangoes. Quackie chimes in towards the end and it gets out of control. Pepe remarks, “That was really weird!” And, frankly, it is.

The mango song is followed by the strawberry song. One of the girls sings that beautifully, but Quackie again breaks in with his falsetto voice. Pepe puts him back in his place with, “Quackie, that was incredibly… weird.”

My favorite bit is when everything goes dark as they travel to the very beginning of time. Quackie says with a scared voice, “Wizzy, I think I just felt something behind me… and it’s HAIRY!!!” Pepe quips, “Por favor, let go of my tail…” I laugh out loud every time.

As they go through each day of creation week, a baritone male voice reads the corresponding Bible passage. The musical background is nice and what you would want to have as the Bible is being read.

This audio drama is 36 minutes long and there are also 24 minutes of bonus tracks. It is intended for children ages 4-12, but, obviously, the whole family can enjoy this if they can put up with Quackie’s craziness. The CD costs $14.99.

One thought on “Wizzy Gizmo Review”