If you are up to 30 lbs. overweight, love to eat, and hate gyms, French Women Don’t Get Fat is zee book for you. Here’s my review of this national best-selling book.

I read this book for the sheer pleasure of learning more about French culture. To my surprise, I was already doing many things French women do. But it makes sense. Because Romania is a Francophone nation, we grew up with many French ideas about life, liberty and the pursuit of good food.

Like a French/Francophone woman, I happen to hate gyms and love to eat, but I am not overweight. That’s because I pay attention, a concept hinted at in Bringing Up Bébé, as well.

However, I did learn a lot more principles French women follow as they pay attention to their weight. Want the skinny? (Sorry, I could not resist…) In two words: portion control. Easier said than done.

Well, this is where Mireille Guiliano’s book comes in: she will tell you how to trick your mind into being satisfied with two tortillas instead of three. Or two ounces of chocolate instead of six. Intrigued? 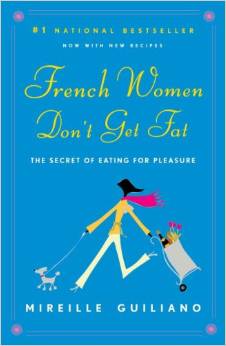 You really should read the book. There’s no substitute for the real thing. Just to um, whet your appetite, here are some of the power points:

If you want a plan of attack, the book will give it to you. Here are the main points:

1. Write down everything you eat for three weeks. Don’t count calories, just write down approximately what you ate and how much. At the end of the three weeks, watch for patterns. Round up the usual suspects (too much food late at night, too many sugary, salty, greasy snacks, not enough water, too many caloric drinks etc).

2. Make a leek soup (recipe in the book) and eat that for two days, plus drink all the water you want. Leek soup is a natural diuretic, it tastes divine, and it will get you a jump start on the French way of thinking about food. Losing a bit of weight in two days won’t hurt, either.

3. The next three months constitute your short-term recasting. The principles in the bullet list above start here. You will lose at least half of your target pounds during this time.

4. Stabilization and eating for life – this is the bulk of the book, complete with recipes and ideas on how to think your way into a thinner you. Also, how to move more without sweating and hurting and paying expensive gym memberships.

The author, a French woman married to an American, lives her life in New York and Paris. She is entertaining, informative, and not at all preachy. She is comfortable with herself and with her message. She is not afraid to admit that one of the reasons France is not the super-power that America is, is that France has not acquired all the technologies that have made American life so convenient and comfortable. But, on the other hand, she points out that it is this easy lifestyle that has made Americans fat.

In conclusion, as Molière put it, Manger bien and juste. (Eat well and eat right.)

One thought on “French Women Don’t Get Fat”