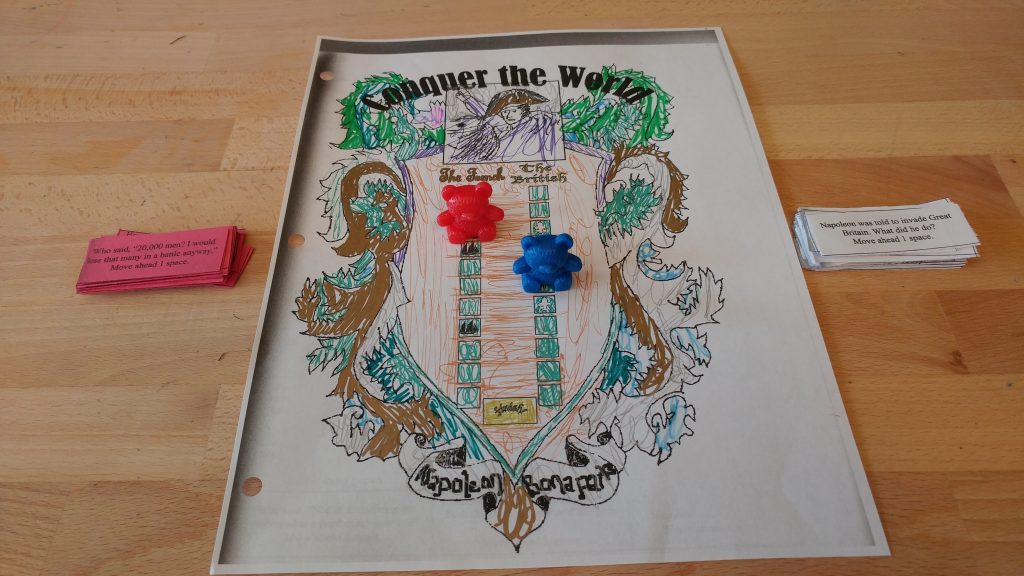 They are not just concerned about the facts. Now they want to know why the facts are as they are. What motivates people to want power? Why does a man want to become a leader at any cost? Greed. That’s the short answer.

So we discussed greed and what it does to people and relationships. We gave examples from our own lives and from some of the literature we have read or movies we have watched. The Bible verse came to mind, “The love of money is the root of all evil.” (1 Timothy 6:10)

We talked about all the art that Napoleon brought from Italy and which is now in the Louvre. “Was the Mona Lisa among those paintings?” they asked me. I did not know the answer to that question.

When I researched it, I found out that no, the Mona Lisa did not come to France with Napoleon. It actually came a long time before that. Da Vinci himself brought it over from Italy.

For the craft or activity, we decided to play the game provided in the Activity Book, called “Conquer the World.” I printed out the cards on construction paper: blue for the French and red for the English. Well, would you believe this? The blue paper got warped in the printer and I got tired of working with it, so I printed out the French cards on regular printer paper.

I did not enlarge the board, either, as they were suggesting. And I did not want to laminate it because I knew we would want to color it. They enjoyed playing the game and I could really tell they remembered the details. It would be interesting to play it again in a month or six months and see if they still remember.