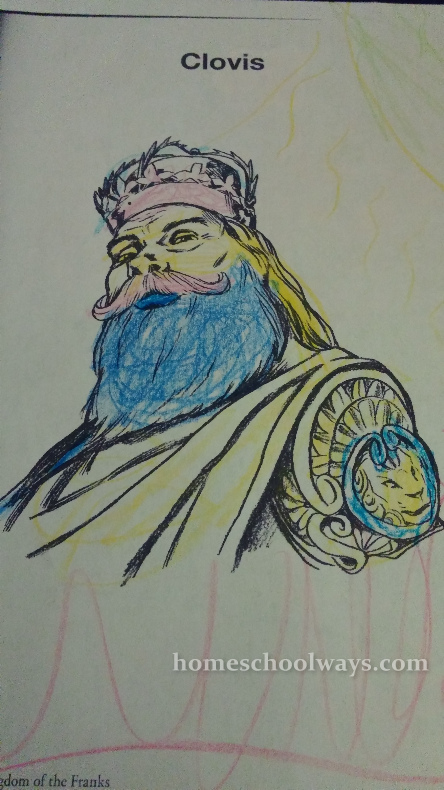 The chapter tells two stories: one about the background around the time of Merovius and how he united the Franks, Romans, Allemani and Burgundians for the first time in order to fight the Huns; the second one is about his grandson, Clovis, who united these peoples again in order to create an empire.

Clovis used three tools toward unity: one law, one capital city (Paris) and one religion (Christianity). You should have seen the transformation in the kids as I mentioned the word “Paris.” They were coloring and listening to the story as if it was just another story, but then this familiar element came into their hearing. 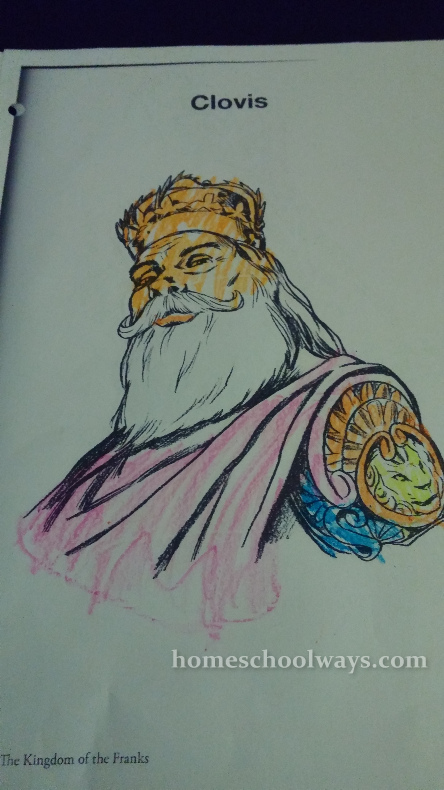 My son decided Clovis should sport a white beard instead.

We had watched the Aristocats and read Madeleine stories. I teach them French. They have heard me tell many stories about France and Paris. They know what the Eiffel Tower looks like. So this was familiar territory to them and they wanted to know more about it.

It confirmed to me that my job is to expose them to places and cultures, history and languages. As they build a body of knowledge, connections keep being made and a larger picture about the world emerges.

They colored the portrait of Clovis and the Fleur-de-Lis, France’s symbol. They worked on the map. I also brought an atlas so that they could follow the journey from New Zealand back to Europe. That trip on the map back to France was a great exercise in geography, by the way.

I decided we did not need to work on any of the crafts mentioned. I have ordered some extra books about the Franks from the library and we are waiting on them. Unfortunately, the lady who was in charge of inter-library loan requests was in a major car accident. They gave the job to another librarian already, but I have a feeling the requests will be processed more slowly.