This week, my daughter and I attended Princess Camp at the Community Center in Gatlinburg. Janice Collart, who teaches tumbling and dance throughout the year, organizes a four-day princess camp in July. It is a drop-off event, but you know me. I don’t drop off my children somewhere in the name of education or fun. 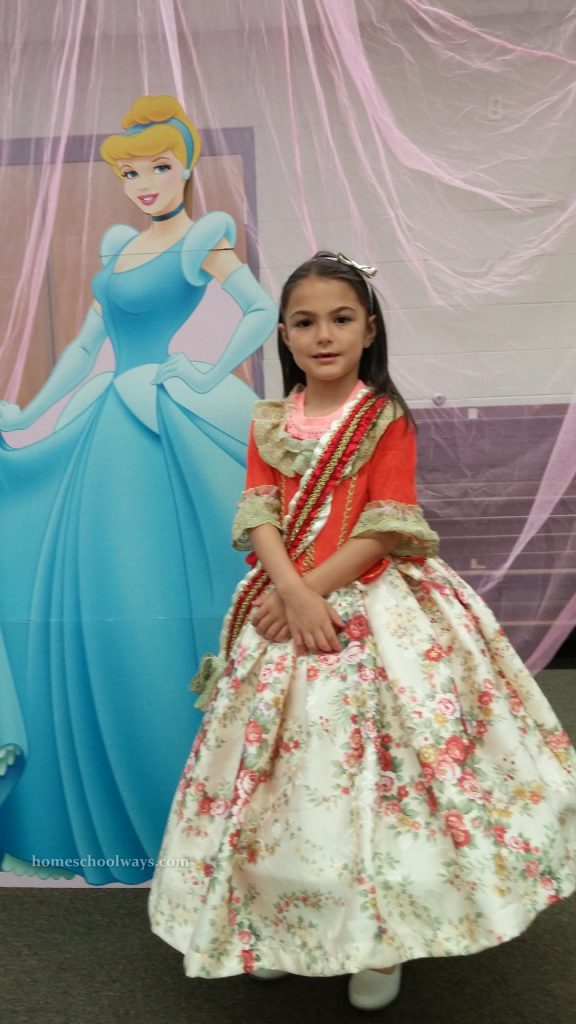 While big brother was in Daddy Camp, i.e. he went with daddy wherever daddy’s job took him every day, my daughter and I went to Princess Camp. It was three hours every day – the fastest three hours I have ever experienced. They really kept the princesses busy.

They played together while everybody was arriving – princesses tend to be late, so there were 5-15 minutes of free play. There was a bouncy house plus several tunnels and tents to run through. They took a roll call when everybody was finally there – it also helped them learn each other’s name. They learned a song, then they sat at tables and did a craft.

One day they colored Cinderella, another day they decorated a foam crown, the third day they colored Princess Ariel, and the fourth day they decorated a butterfly. After snacks, they had a bathroom break. Then, split into three age groups, they rotated between tumbling, dance rehearsal, and more crafts (or nails). On the second day, they pinned lips on a frog. They also learned to shoot arrows (as in the movie Brave).

On the last day, they performed for everybody – two dance routines, one slow, one fast (mostly marching motions and with ribbons). There was also a royal parade – they got to walk up and down the ramps inside the Community Center and wave at the crowd of parents and family members that had come for the performance.

One of the reasons why I agreed to this Princess Camp is the dance routines, which helps a child become more aware of tempo, rhythm, and counting. Stepping in sync with the music, involving the whole body, really helps a small child get in touch with the idea of tempo. My daughter, like any six-year-old, has a hard time slowing down when she plays piano or violin, and she has a hard time keeping a consistent tempo. Doing a dance routine where she hears 1-2-3-4-5-6-7-8 and has to count her steps can help a lot, even if it’s just for four days. We have no long terms goals of enrolling her in dance classes.

These girls were ages 3-9 and loved every minute of Princess Camp. We did not have any behavior incidents other than one or two who cried for “mommy” and one princess who had a bit of an attitude toward everybody. But Ms. Collart and her daughter, who helped a lot, knew how to talk to these girls and how to appease them.

My daughter and I baked cupcakes for the third day of snacks. She had fun decorating with sprinkles after I frosted them. What was I thinking? I did not even take pictures of them. Anyway, she went to town with the decorations and I decided to get over myself and my need for things to be “just so.” I rejoiced that decorating the cupcakes was one less thing for me to do and I accepted her work with gratitude. I even praised her for the good job. And, for the most part, it really was a good job. The ladies complimented us on the cupcakes, so we will take it.

On the last day, we had a visit from Cinderella herself – a local young lady with whom I used to play tennis. She is tall and blond and very beautiful. When she puts on this Cinderella blue gown and white gloves, she really looks the part. The girls loved meeting her.

As a general rule, I stay away from Disney and its princesses, but I have a girlie girl of a daughter and I did not see any reason to refuse her when she asked to go to Princess Camp. We are slowly learning about Mulan and Jasmine and Pocahontas and other Disney princesses. They are a part of Americana, so we must know what these movies portray. It’s all innocent and good feminine fun for the girls. But I will have some serious conversations with my daughter about what Prince Charming must be like when she hits a certain age.

I will close with a quote from Cinderella: “The right shoe can change your life.” Isn’t that the truth?

One thought on “Princess Camp”