This year, we stayed home and played host and hostess to a small group made up of family and friends. There were ten of us around the table, including the four of us. Viewed differently, there were six adults and four children. 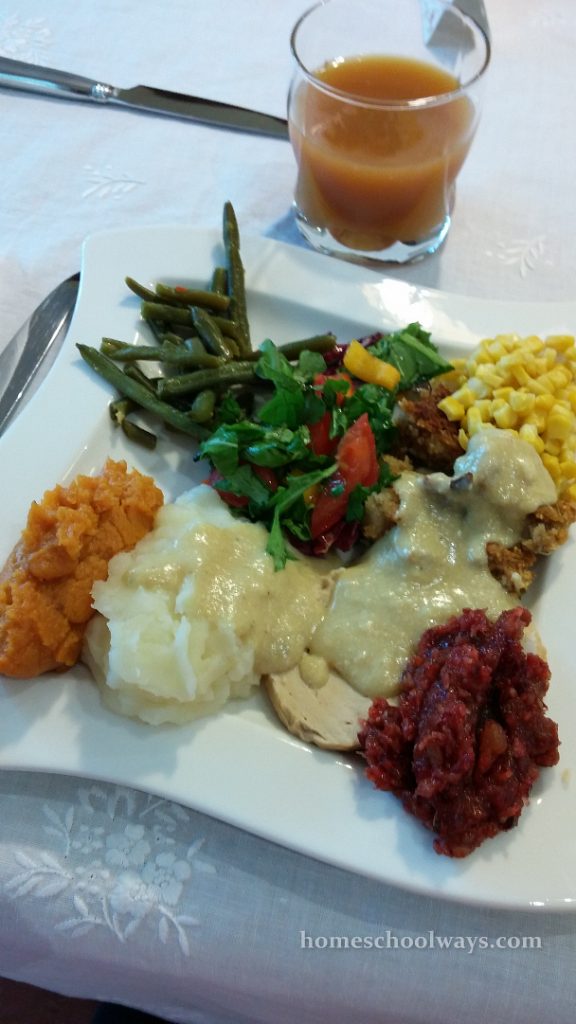 If you decide to try the cranberry relish from the link above, which is from Forks Over Knives, you should not add the orange zest from both oranges. Maybe just the zest from one orange. I found it too bitter and then I had to add more dates to take away the bitterness and the cranberries got overpowered by the date taste and texture. Don’t say I did not tell you.

My mother-in-law brought turkey and dressing made with animal fat for those around the table who were not of the vegetarian persuasion. Food is an emotional issue for most people and I have no desire to change anybody’s lifestyle. I live my life and hopefully everybody else can let me be just as I let them be.

At Thanksgiving, you will not persuade anybody to change their diet, religion or politics anyway. So we chose hospitality and kindness, as we always do, and we didn’t make a big deal out of our differences. We have told the children not to say anything bad about other people’s food choices. We respect everybody’s freedom to pursue life, liberty and happiness in their way.

My children love animals so much, they have never asked to taste meat, in case you wonder. In fact, as we are now going through the Little House in the Prairie series, they are getting the picture that living in the big woods or on the prairie included eating a lot of wild animals. They don’t like it. They are thankful we don’t have to live off of animals shot by somebody.

Thanksgiving is my favorite holiday because it is about the Pilgrims, good food, and gathering my husband and children around the table. I love feeding them.

This year, we turned on the TV for the first time so they could watch Macy’s Thanksgiving parade in New York City and then a bit from the dog show. It’s an American thing and they need to know some of these symbols of Americana. I liked the song about kindness – I forget which show it is from, but my son picked up on it and told me later on about it. I know they learned a lot as they watched the parade.