Every spring, I buy some vegetable plants and start another garden in my 4’x8′ enclosed patch in the backyard. The whole thing started when my son was one. I felt inspired to teach him where foods come from. He is six years old now.

I have learned a thing or two every year from working in the garden. About gardening and, also, about my own character. Lately, about homeschooling, too.

This year, I have already gleaned two lessons:

1. Don’t (trans)plant too early. We planted our veggie garden in mid-April. A week later, hail and snow killed it, even though we covered it with a sheet. When it’s cold, it’s cold.

Plus, the rule of thumb is, plant outside after Mother’s Day (second Sunday in May). But we got in a rush…

Children are like plants. You take children out of the warmth of their home and they freeze up in the cold of school buildings. 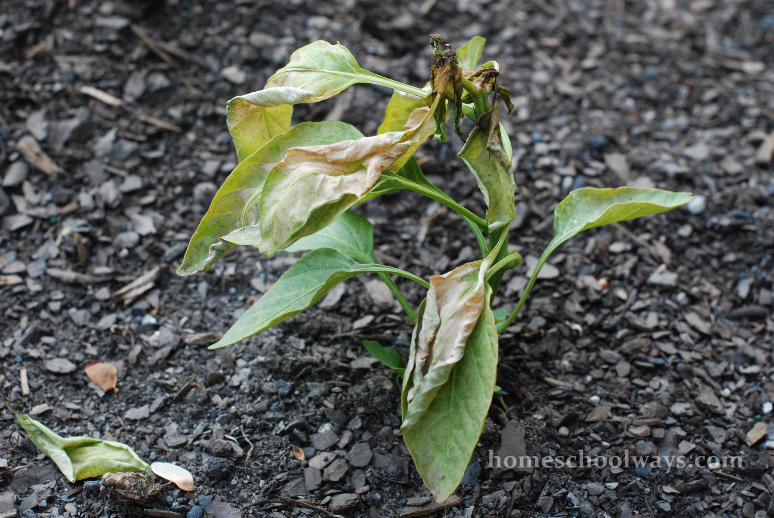 Pepper plant shriveled up in my first garden this year, after hail and snow damage

If you don’t wait until they have had all the mothering needed, well, you will suffer some consequences. Wait for Mother’s Day – the symbol of nurturing.

I have had several parents tell me how their warm and bubbly five-year-old child went to kindergarten and became a cold, withdrawn person as the weeks went on.

Everybody is asking, “What about socialization?” from us homeschoolers. I think we should ask these same people the same question about their children, who meander the jungle of social interactions all alone, for seven hours a day, five days a week. No wonder children are exhausted by the time they come home. No wonder so many of them become peer-dependent. No wonder the family unit has become a joke in most cultures these days.

2. Don’t water inappropriately (while the sun is still shining). The day we re-planted the garden, at the end of May, I watered. It was around 5pm. I thought it would be late enough in the day. It was not. The sun was still shining and it was 77F. A lot of the leaves got burned by the sun, due to the magnifying effect of water on the leaves.

In my rush to get the project done and checked off my list, I forgot to take into consideration the conditions I was working with.

How do I apply this to homeschooling? Well, in our zeal to make our children Ivy League-ready, we might teach them too much, too soon. Absolutely we must quench their thirst for knowledge. Sure, we must challenge them. But too much knowledge, too many demands, too early will lead to burnout. 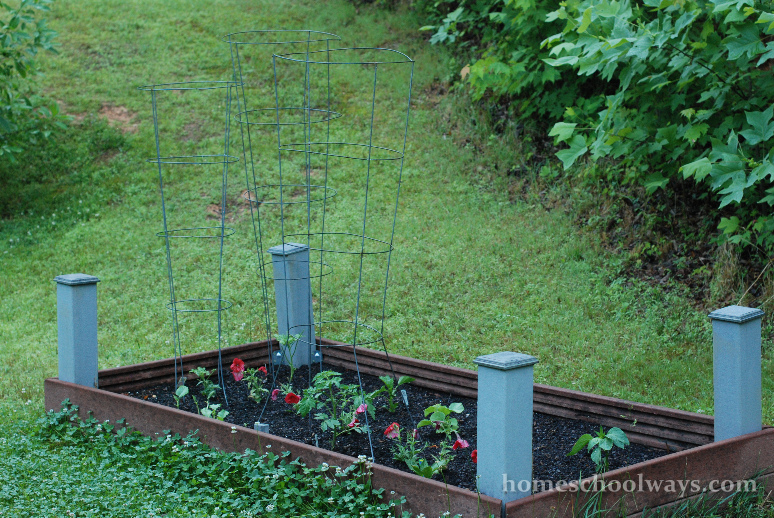 My second garden this year.

I have trimmed the burnt leaves. Many of the plants seem to be doing fine, but some will be lost or not produce as much. The same goes for children who get burned out with too many worksheets.

In case you are wondering, I planted tomatoes, peppers, cucumbers, squash, and watermelon.

Here’s hoping that my garden will survive and thrive.

One thought on “Wonderful Wednesday – Planting a Veggie Garden”