Chapter 37 took us back to Africa, troubled Africa, with two stories: “The Zulu Kingdom” and “The Boers and the British.” The kids colored the page with Shaka, the Zulu king. We also did the map. 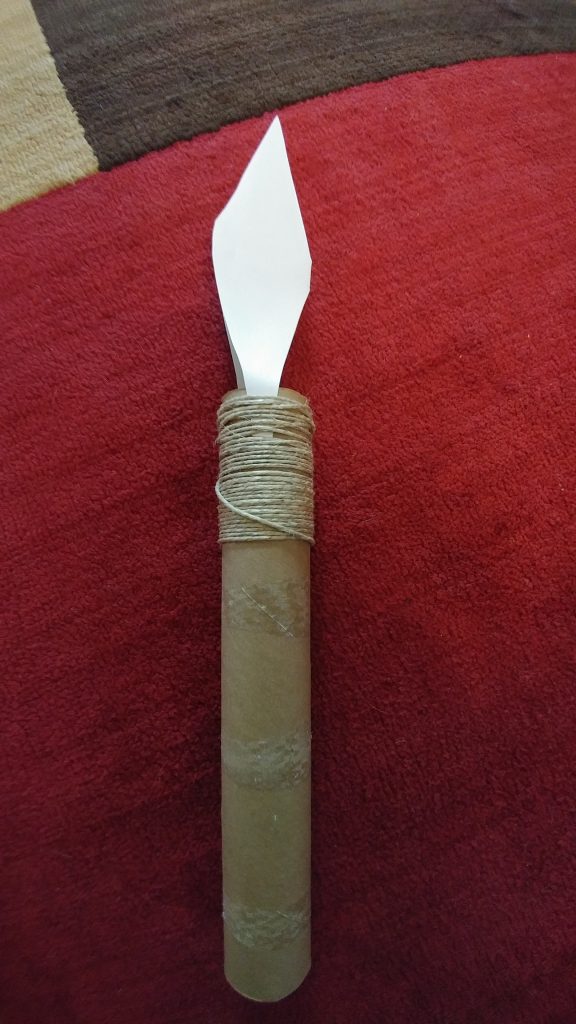 For our craft, we worked on the small spear. We found it very difficult to staple the tip to the paper towel roll, but we made it work. Since I did not want to rush to the store to get silver spray paint, or make a mess painting the tips silver and waiting for them to dry, I decided to use sparkly, silver card stock I happened to have.

How to transfer the provided black tips onto the silver card stock? Well, we traced the black onto butcher paper. It’s not the most transparent paper you can fine, but it works. The originals provided were black enough, you could see them through the butcher paper.

Then, we put the butcher paper over the silver card stock and traced over the pencil marks, pressing really hard. It actually left indentations into the card stock. At this point, we could trace over the indentations with a pencil, or we could just hold it to the light at a certain angle and cut it with a pair of scissors. We ended up doing the latter, to save time.

The fun part was the raffia. It took a bit to get it twined nicely around the tube. You can see in the picture. By the time we were done with three inches of wrapped raffia, we did not feel like unrolling it just to make it all pretty. As I said before, we are more about learning things than about perfecting crafts to put on Pinterest. Oh, and the raffia was made in Romania – as an added bonus for those who care.

It was interesting to explain about the Boers. They were from Holland, or the Netherlands, but they are called Dutch. We have been through this before, but it is finally sinking in – all the names we have in English for Holland.