Chapter 41 deals with more explorations in North America. We learned where the name Canada comes from (kanata, an Iroquoian word) and what it means (village or settlement or land). There were two stories: one about John Cabot and the other about Jacques Cartier. In all honesty, all this was new to me. I love learning alongside my children. 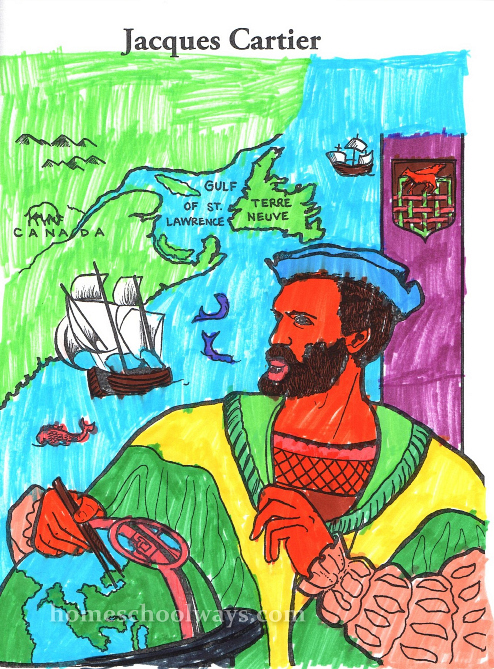 Newfoundland or Terre Neuve sounds like a great place to visit one day. I imagine the climate is similar to Sweden, where I lived for three years, so summer would be the best time to plan a trip up there.

As to Cartier and his treatment of Donnacona, the Native American chief he took to France. Donnacona was the chief of the Hurons, to be exact. Cartier kidnapped him and took him to France, where Donnacona died in captivity.

Ms. Bauer does not glorify colonialism and calls things for what they are. The rough treatment of the natives should not be avoided, though neither should we only dwell on how bad the explorers were. I find that Ms. Bauer struck a very good balance between reporting the facts and not making the explorers look like monsters.

This was, after all, the XVI century and everybody was treating everybody cruelly. Catholics and Protestants, Turks and Germans, peasants and nobility, everybody was fighting somebody and – let’s not forget – when they got prisoners, they really made them suffer.

We colored the portrait of Jacques Cartier, did the map work, and called it a lesson. One more lesson to go.