Chapter 39 deals with England’s Best Playwright – William Shakespeare. For the first time in two years, I chose not to read something from our main book of history (Story of the World). The first story which explains entertainment during Elizabeth’s reign and the details of Shakespeare’s life and career was fine. I read that to them. But the second story was a summary of Macbeth. 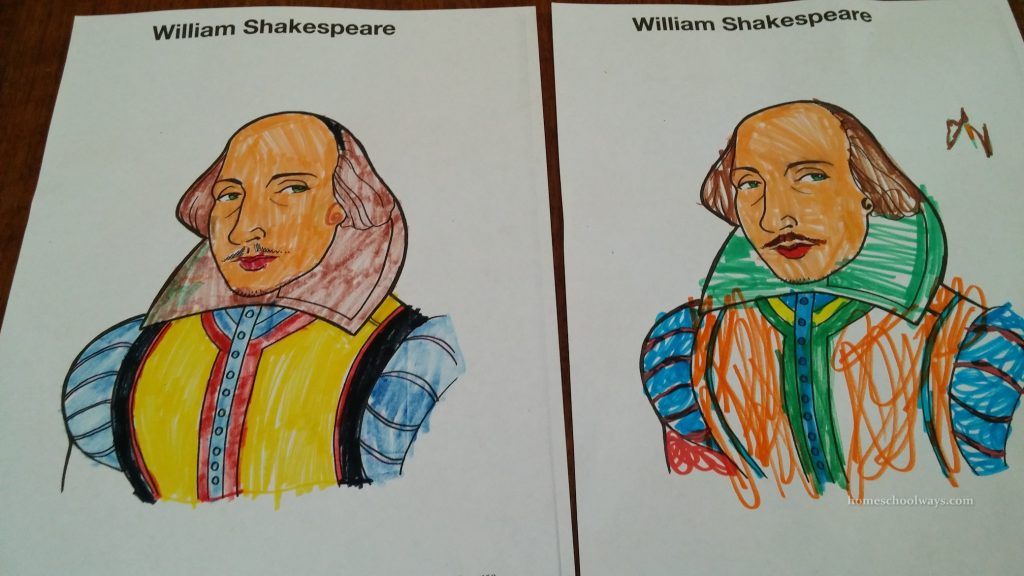 Especially because of my youngest being only six years old, I chose to skip that part. Assassinations and too much revenge, too much description of the bad guy’s feelings of envy, jealousy, greed etc. While I can appreciate Shakespeare genius at capturing the transition from good to evil intents in somebody’s heart, I don’t think children can focus on that. They just get the shock of the violence described.

My children don’t need those images in front of them at this age. They need positive role models. When they get older, they could handle this as we will talk about consequences for the bad and they could probably handle the dynamics of medieval relationships. But for right now, no Macbeth for us. I am all for teaching Shakespeare in upper grades. I cannot imagine going through life without studying the Bard.

My goal in the lower grades is for them to know who William Shakespeare was, what he was famous for, the definitions of words like tragedy, comedy, historical play, and some of the famous phrases we use today which originated with his plays: to be or not to be, that is the question; a horse, a horse, my kingdom for a horse; there is something rotten in the state of Denmark etc.

I wondered why Ms. Bauer chose Macbeth. Why not choose a comedy instead? I looked at the passage she suggested the kids memorize and decided that it was way too heavy in content, not to mention the Shakespearean form. It was heavy and depressing even for me. Macbeth’s famous speech about life and death and the foolishness of our existence is enough to depress even a happy camper.

We did the map and they colored the portrait of William Shakespeare and we called it a lesson. Three more chapters to go!