As you might know, Gatlinburg, the town where we live, has been all but engulfed by wild fires on Monday night. I was in Knoxville with the children, for their orchestra rehearsal. When we left the house, Gatlinburg was covered in smog coming from a fire that was burning in the Chimney Tops area of the Great Smoky Mountains National Park.

We left the city around 2:30pm, about an hour earlier than we should have, but it was intentional. The previous week we ran into a lot of traffic and were almost late for practice. I just wanted to give myself plenty of time. 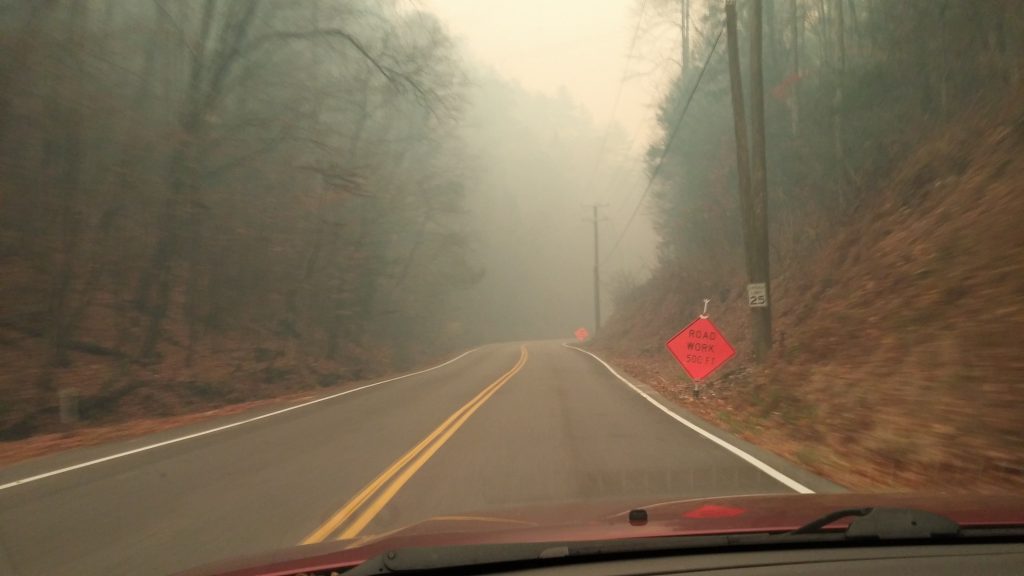 As we left on Monday afternoon, the Spur was eerily being filled with smog and we got quiet in the car.

Outside our home, one could already smell the fire – wood burning smell, but ominous. By the time I got to Light #1, the children and I were in a state of disbelief at the smog, the cloud-covered sun, the strange yellow light around us. My husband was at Zoder’s Inn, monitoring the situation, waiting for updates from the local authorities, and communicating with us regularly.

At one point he called me and told me “it’s bad.” When he said the Reagan castle was burning, the castle some of you may know, which is on the hill behind Light #3 in Gatlinburg, I knew tragedy had struck our little town. 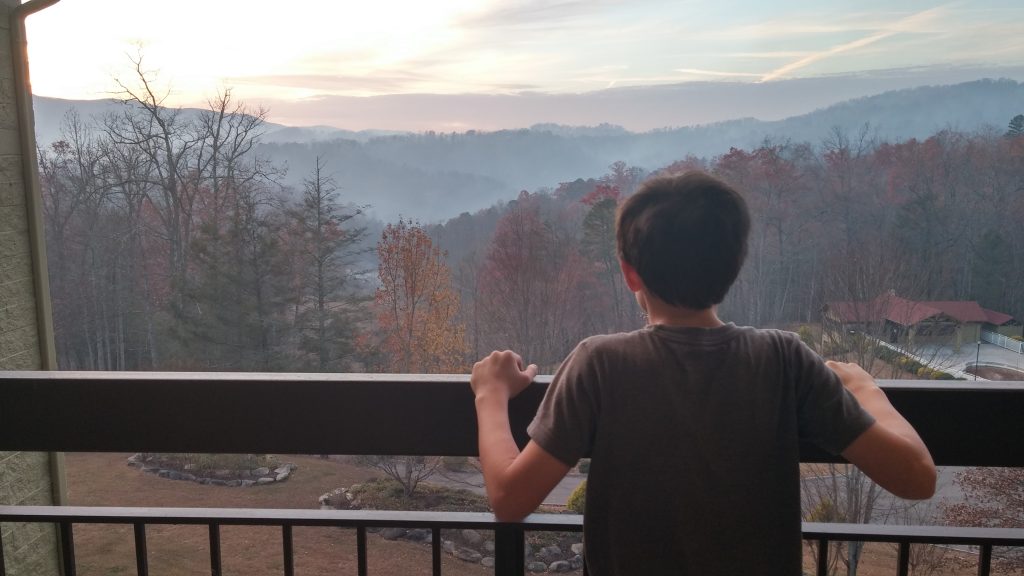 Our son on the balcony of our condo, 24 hours after the bulk of the fires was put out.

Sometime during orchestra rehearsals my husband called again to say he decided we would all spend the night at the hotel. “Don’t go home, come straight to Zoder’s. And take the back roads, as they closed off the Spur,” he said. He also mentioned high winds and that the rain we were all praying for had not started. He said tree limbs were falling all over the lawn and onto the roof at our house and he had left there to check on the hotel.

When I left Knoxville, I called him and he said the situation had gotten worse. He could see brush fires everywhere and had gotten his mother and her husband to join him at the hotel. They live very close to our home, about 10 minutes away from the hotel. Thirty minutes later I was in Sevierville and when I called him to get an update he told me not to come at all. The city of Gatlinburg was under mandatory evacuation. 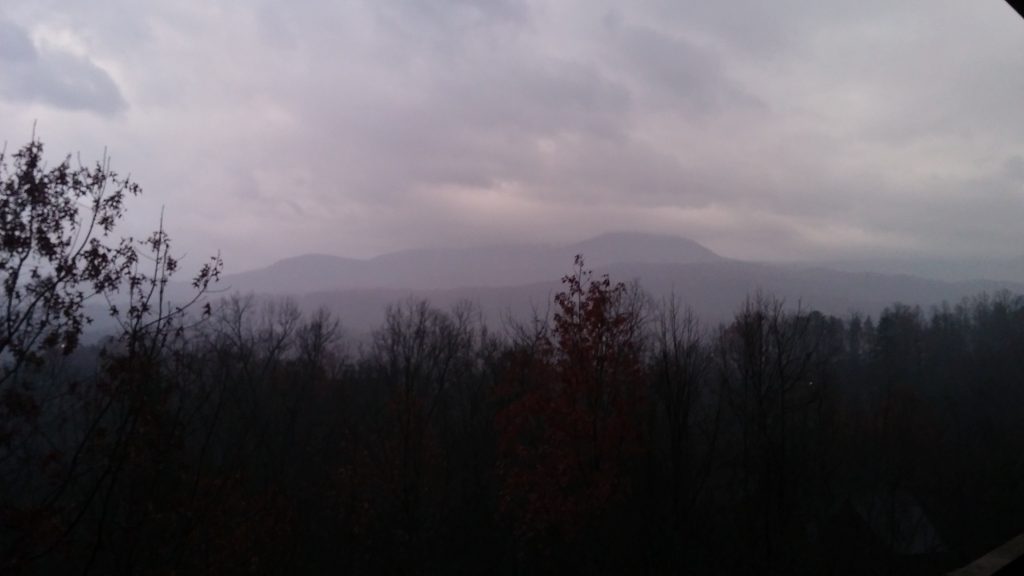 The view from our condo on Wed morning, as the rain kept falling and helping firefighters.

We decided I should call friends in Seymour to see if we could stay with them. My friend answered her phone – a miracle in itself, as it is her habit not to – and she was glad to help. This is a family we have known for more than a decade, who have babysat for our children and whose children we have watched grow into great young adults.

I found their home in the dark, shock, and confusion of the night – another miracle. The children were excited to spend the night at their babysitter’s home. The images we watched on TV were harrowing. It took my husband almost three hours to join us, but he made it to Seymour safely with his mom and her husband. 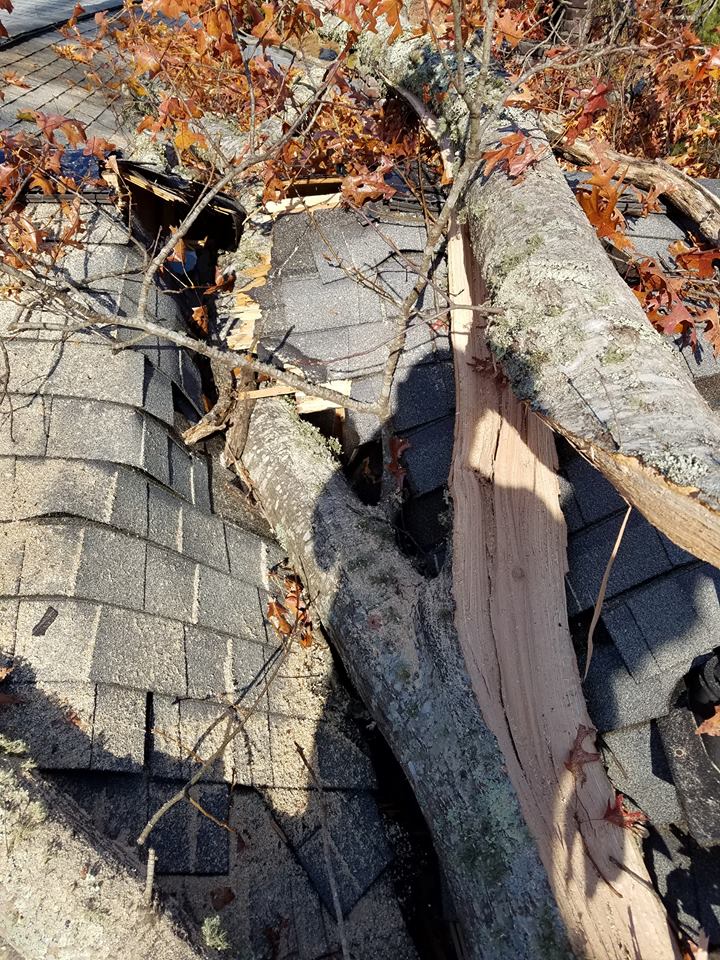 This huge tree fell onto the roof of our home, causing some water damage too, as the rain started that night

We went to bed but could not sleep, not knowing if we still had a home or a business to go to in the morning. We prayed and trusted God for the future. The verse “I will give you beauty for ashes” came to mind and I was encouraged to hope that life will go on, even if we lose everything. My husband was at peace, but he was convinced the whole town would burn down. “There’s a reason for all this,” he said. He drove through scenes he described as hell. Fire burning everywhere: in the trees, in the grass, on structures.

The next morning we received news the hotel was standing, as well as my mother-in-law’s restaurant, The Trout House. The Rocky Tops Complex was used as a shelter and command center for the operations, and the reporters stood with their backs toward the hill where our house was. Behind them, it was dark – a good sign, I thought. No flames over the reporters’ shoulder and the fact that they stood five minutes from our house, asking people to come there if they needed refuge, reassured me that our house was going to be fine. But you don’t know until you see it with your eyes. 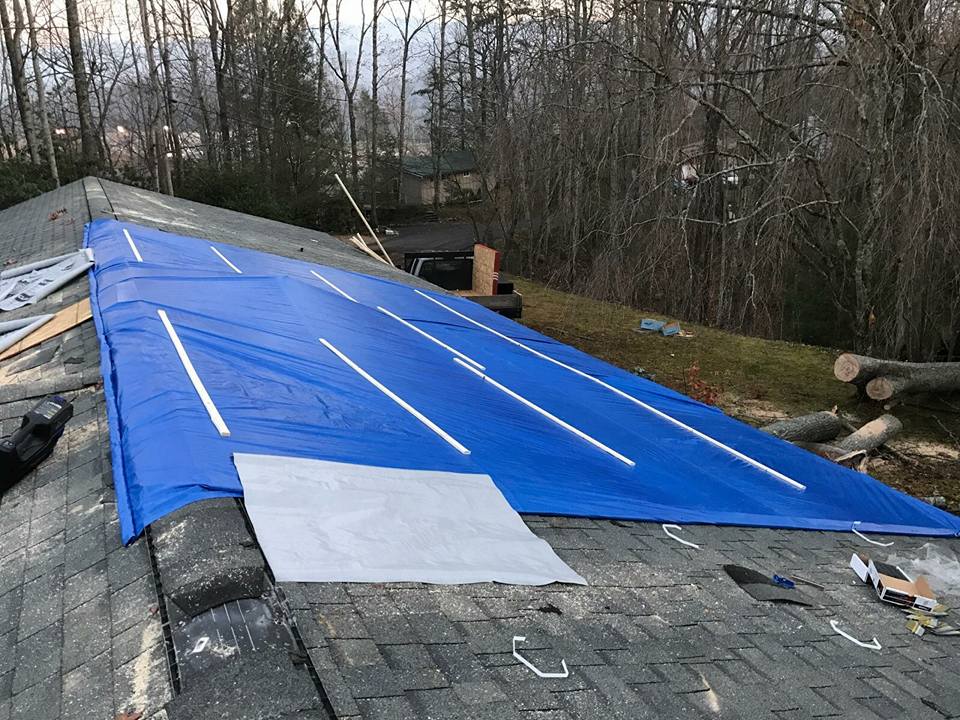 The recovery has begun, as my husband’s friend and his crew put a tarp over the roof

We got a couple of hours of sleep and then my husband and his step-father left to check if they could be allowed to check on their properties. Several hours later, we received news that, indeed, our businesses had been spared, no fire damage. Our home got hit by a tree felled by hurricane strength winds – it ruined the floor in several areas, because the rain came that night, but we counted our blessings.

Our cat was safe, we were all safe, and the damage was repairable. Many of our friends were not as fortunate. We know people who have lost their homes, their businesses, or both. We are staying in a condo five minutes from our house and are slowly cleaning the mess before we hire a contractor to fix the house. A tarp has been placed over the large hole in the roof.

Please pray for the city of Gatlinburg and all the people who have lost so much in the fire. If you want to support the victims, you could donate to the Red Cross, to Dolly Parton’s My People Fund, or buy a Smokies Strong t-shirt.

The last 48 hours have been a crash course in survival for our children and you better believe I count Tuesday and Wednesday of this week as school days. They learned strange new words: FEMA, TEMA, the National Guard, black hawk helicopters, legendary, evacuation, evacuees, as well as many new Bible promises about “when thou walkest through the fire, thou shalt not be burned.”

13 thoughts on “Our Escape from Gatlinburg Wildfires”