“Onward” is my word for 2017. It came to me in an email from a friend who was inquiring about housing for a friend of hers, who lost her home in the Gatlinburg wildfires. When I told her we had already rented out the condo once we moved back into our home, she thanked me, added a few niceties, and ended the email with “Onward!” 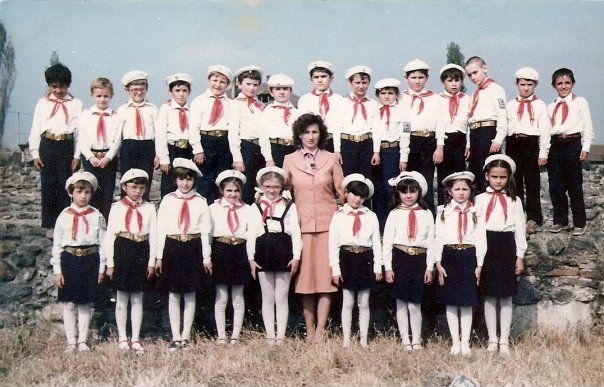 It totally took me back to my childhood. In Communist Romania, school children were “Pioneers” – a scouting organization of sorts. Our motto was “Onward!” We used to have regular assemblies and the Pioneers’ Leader would say, “Pentru gloria poporului și înflorirea României socialiste, pentru cauza partidului, înainte!” (“For people’s glory and Socialist Romania’s flourishing, for the Party’s cause, onward!”) and we would answer, in a chorus, “Tot înainte!” (“Onward still!”)

So silly. It sounds both silly and surreal looking back on it, not to mention that it gives me chills to think that I went through such a regime. For this reason, “Onward, Christian Soldiers” has never been one of my favorite hymns.

However, once that friend put it in an email after we went through a national disaster and historic fire, the word changed its meaning. It became a good slogan, a positive slogan, something survivors mutter under their breath, after having thought they would lose their lives together, in the fire. So onward we go.

This new year starts with several challenges for us on the home front, as we still need to do some remodeling at our house after the wildfires. But our routine has been so drastically interrupted, we need to get into a better routine before we get disrupted again by spring break.

We are still waiting for our insurance to settle our claim satisfactorily. The same is going on at my husband’s hotel, Zoder’s Inn and Suites. It’s a long story, one that is still unfolding. Maybe I will tell it when it is over.

Homeschooling is going well. The children are growing and I have learned the yearly routine by now: testing in March means that we focus in January and February (with some breaks for sanity if needed) and then in April and May we are home free or, at least, we are in the home stretch. Spring break will happen after testing, during the last two weeks of March.

Then summer will be upon us, with camps and leisure and library visits. And, hard though it seems, August will roll around before we know it and this time I will have a fourth grader and a second grader. My, my. I am coming up in the world.

Hopefully, through it all, we can continue all the routine of extracurricular activities: orchestra, violin, piano, tae kwon do and soccer. The kids have asked for tennis and swimming but we have no time. Period. I told them something has to give and they don’t know what.

And then it will be Christmas all over again, and a new year, 2018. But let’s not get ahead of ourselves. Here’s to a studious, prosperous, and happy new year, 2017! Onward, onward still!

Full credit for the picture: By G.B. – Personal files. The copyright holder granted me permission to upload the photograph to Wikimedia Commons and release it under the following Creative Commons License., CC BY-SA 3.0, httpss://commons.wikimedia.org/w/index.php?curid=5252771