When was the last time you cried? For me, it was last week. I don’t cry often. I tear up often, but I don’t weep. You know, like, with tears coming down my cheeks. But men’s figure skating touched me so much the other night, I was weeping. What does this have to do with homeschooling? Everything. 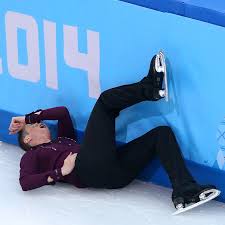 Jeremy Abbott fell during the men’s long program at the Sochi Olympics. But he got up and finished the program.

Homeschooling can be intense – like the Olympics. Many are called, few are chosen. Few can put up with the pressure. Much of the pressure we bring upon ourselves. Injuries happen. Emotional injuries, mostly, for us. One homeschooling mom who graduated her two children told me that we don’t know how angry we are until we homeschool.

So much of ourselves comes out in the process of imparting knowledge to our children. Stuff that we did not even know was there. It takes us by surprise. We wonder if we can move on. And we have to move on. In spite of our mistakes and our shortcomings and our failings, we must pick ourselves back up, apologize to our children, and start another day.

What in the world happened with Plushenko and Abbott that night at Sochi? When Plushenko told the judges he would not skate, I got sick to my stomach. I don’t take medical details well and it did not help that his coach had made him show his back surgery for the camera.

And then, Jeremy Abbott fell. It looked like he was severely injured. But he got up in a heroic effort that makes me want to never, ever, ever give up. Anything. No matter how hard I fall, I want to get up and keep going.

In his words, “I may not be an Olympic champion, but at least I can teach the world to get up after a hard fall and go on.”

Thank you, Jeremy, for the lesson you gave us. We may fall in private, but you fell in public. Tougher by a mile. Thank you.