The title could also be changed to “How to Homeschool While Your Entire Family Has the Flu.” Yes, we had the flu all of last week. It started the weekend before that, but we had no clue. We thought it was just a sore throat due to seasonal allergies. 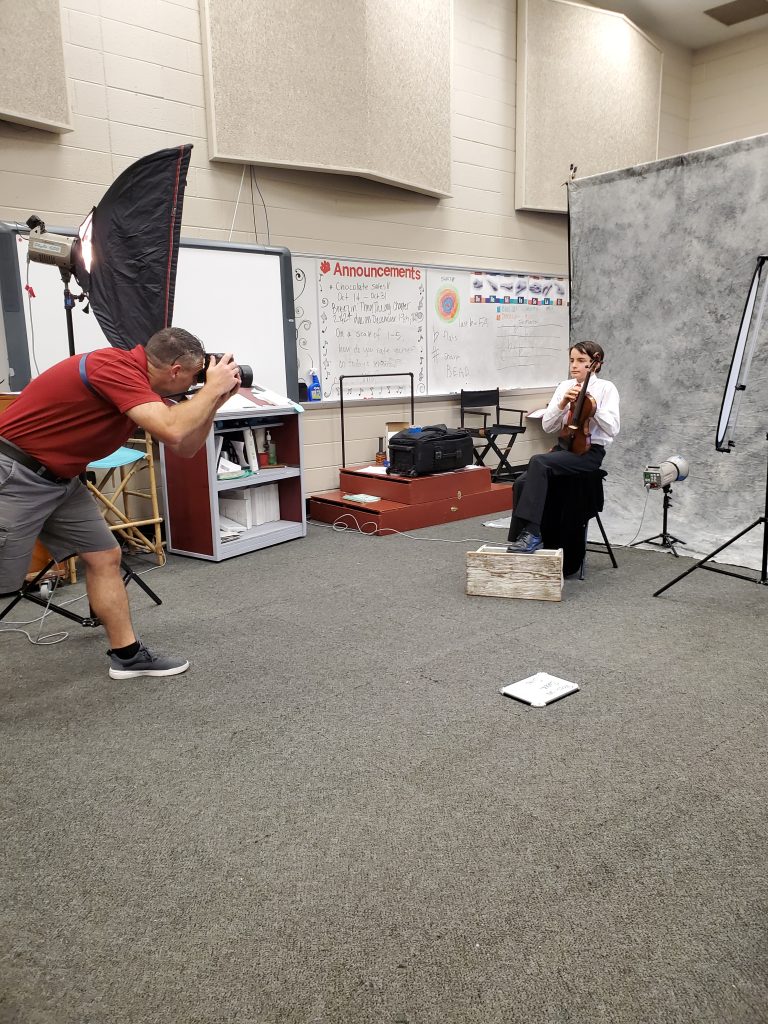 Every year, they take official portraits for the youth symphony.

Then our son started coughing badly on the way to orchestra. He stayed for the photo session, happening only that day, but not for the rehearsal. The next day, he was running a fever. A visit to the doctor confirmed he had the flu. By now it was too late for anything other than rest and lots of fluids. I made tea and heated up soup several times a day.

Our daughter felt better, so she did her orchestra rehearsal. For the rest of the week, she was the one feeling the best out of all of us. However, she did have a sore throat and, later, a cough. Not fun.

The kids had to take some cough medicine so they can get relief from the cough. When they start hurting from too much coughing, it’s time for Dimetapp. We also gave them elderberry extract syrup, which is supposed to help the immune system fight the virus. I think it works. 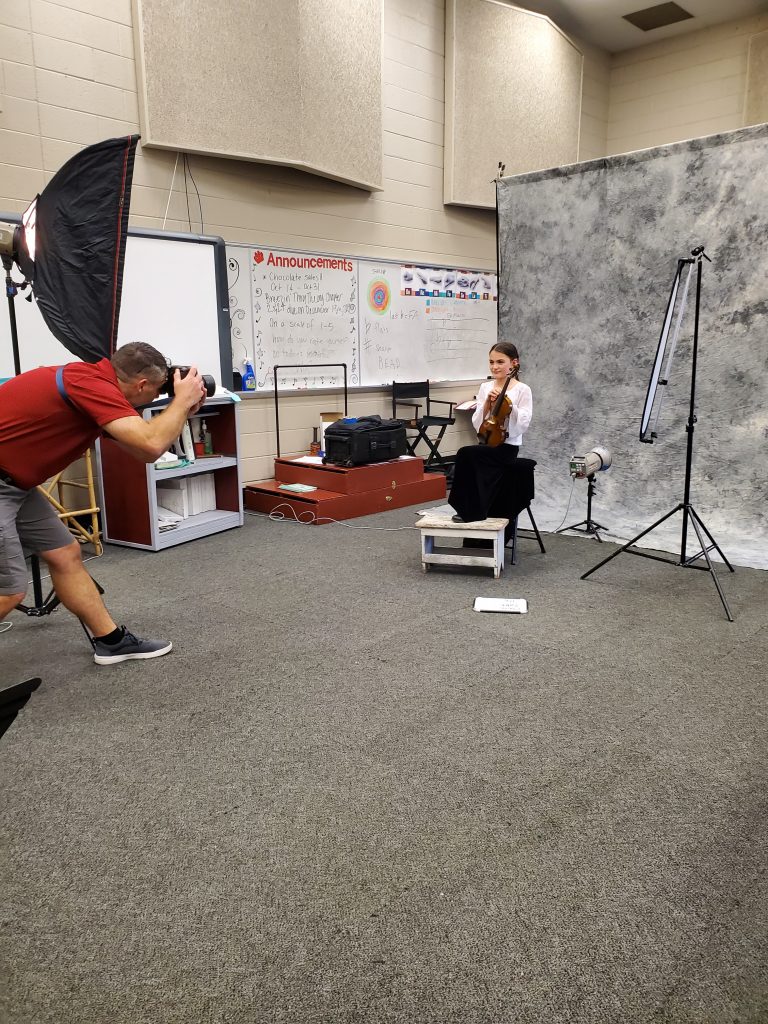 Our daughter getting her picture taken for orchestra

It was a tough week to stay away from sweets, but we had to. I had made pumpkin cheesecake, with a gluten-free crust. It was also that time of year when people hand out candy to children dressed up in costumes. Yes, that holiday. We skipped right over it as we laid in bed exhausted.

What counts as learning?

So what counts as school? How about learning that lots of fluids help carry the virus out of the system? And that sugar lowers the immune system response, so stay off sweets when ill? That’s science. How about watching YouTube tutorials about music software? That’s technology AND music. How about rearranging furniture as our new bookshelves got delivered? That’s interior design. How about watching Akeelah and the Bee? That’s language arts. 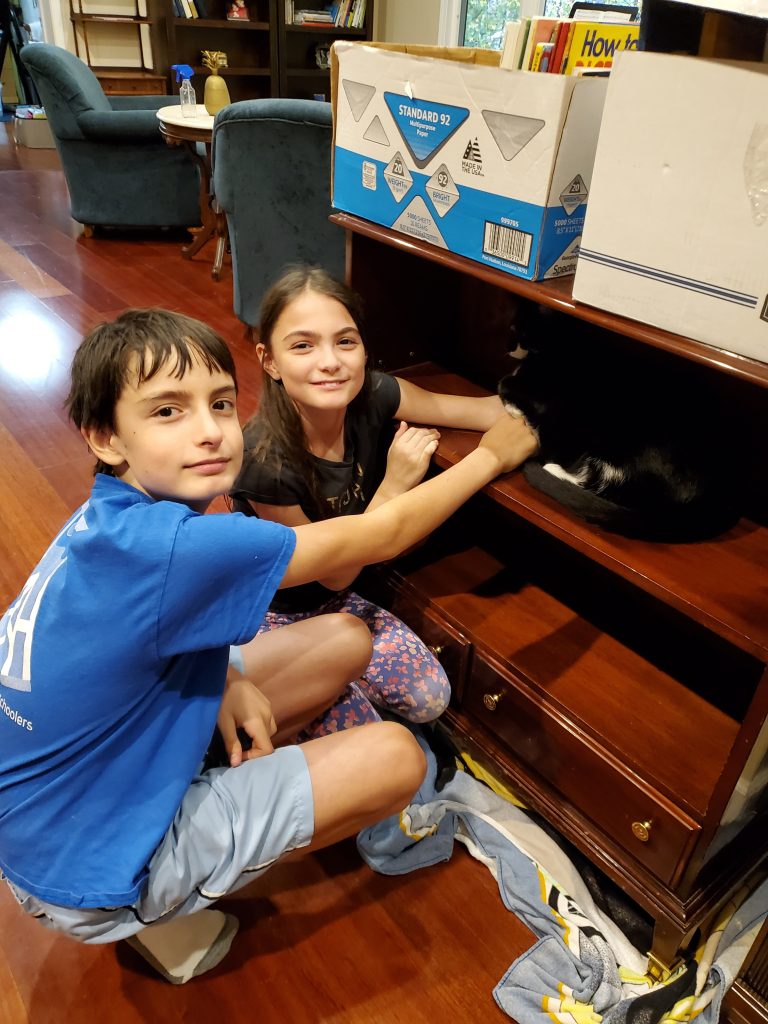 Petting the cat as we moved bookshelves around

I bought this movie last summer and kept it for a day like this, when we are ill and need to do something that counts as school. In public school, they watch The Lion King and other Disney movies, so I did not feel bad at all.

With Akeelah and the Bee, the kids got a taste of what it is like to prepare for the National Spelling Bee and how to fight self-defeating thoughts. We also talked about urban schools and the dialect the movie calls “ghetto talk.” Lots of education going on, trust me. 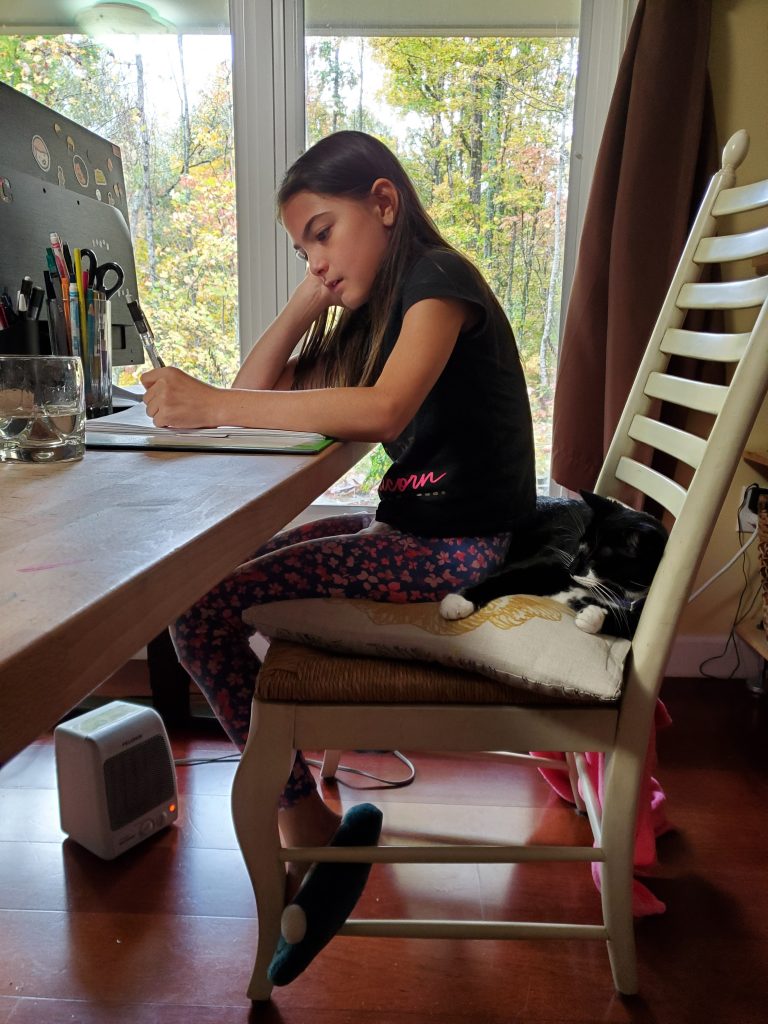 When the family cat shares the chair, it is hard to focus on math. But we must.

We canceled all classes outside the home. By Thursday, we were well enough to do three things: Bible, violin, and math. If those three were the only subjects a child studied, said child would receive a wonderful education.

By the weekend, we felt well enough to have some family celebrations, as my son and husband both have birthdays this coming week. Also, we did special music in church with other violin players. Check the video here.