With 30 years of experience as a clinical psychologist, Dr. Ken Wilgus specializes in adolescent therapy. In 2015, Wilgus published a book which he titled “Feeding The Mouth That Bites You.” 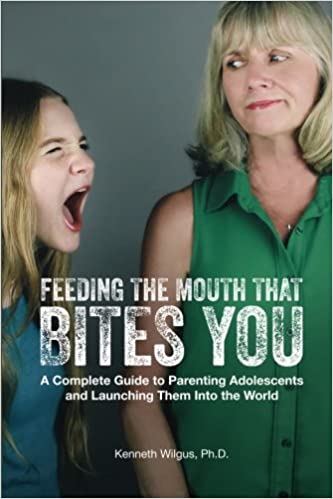 Wilgus describes a “Planned Emancipation” – a plan on how to prepare teens to become full adults.

In order to launch them as adults after they graduate from high school, we must allow them more and more freedom in specific areas. Wilgus offers a word picture: your teenager represents a country divided into states. At first, parents occupy every one of those states. The list of states includes music, friends, room, school, sports, clothes, curfew etc.

Parents tell the teen that the teen no longer has to keep his room clean, for instance. By the same token, parents communicate clear boundaries: if we have to bring in an exterminator to clean up ants in your room, you pay the bill. If you cannot find your bowtie one hour before the concert, too bad. We will not help you look for it. (That would be a hard one for me.)

Every year, parents relinquish control of other states in their teen’s country. Natural consequences teach a person a lot more than speeches and angry voices. So parents of teens sit back and relax (at least outwardly, while inwardly praying really, really hard), allowing the teen to learn from his own choices.

You can also listen to their podcast, in which Dr. Wilgus moderates with two mothers who apply this method with their own teenagers. They also run an Instagram account by the same catchy title, Feeding The Mouth.

Personally, I felt so relieved when I found out about this planned emancipation. The last few years have been very stressful, as my children became teenagers. I felt like I did not know the rules to this new game. What to do when your child becomes this person you do not recognize anymore?

I am still reading the book, but have started applying the principles already. After listening to several podcasts and watching four YouTube videos from Focus on the Family, I felt empowered. From day 1 of unofficially putting the plan in action, the dynamics have changed.

I will return with a report after a few weeks of planned emancipation. If you do not have teenagers yet, start listening to, watching, and reading “Feeding The Mouth That Bites You” now. I wish I had known about it sooner, but it is never too late to start the plan.