On Election Night, my husband and I allowed the children to stay up and watch the results of the election roll in state by state. We had taken them with us to the voting precinct that morning and we had been talking with them about who the candidates were, what issues we had concerns about and who we wanted to win. 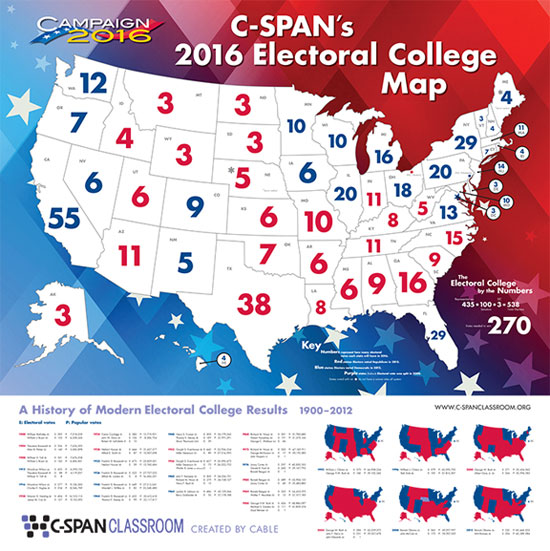 We referred to this C-SPAN Electoral Map throughout the night.

I printed out some great materials for that night: an electoral map which shows how many electoral votes each state gets and a US map coloring page, which they could color in red or blue as the results were announced. We also watched a video with Grover and Sal Khan, which explains the Electoral College for children.

They went to bed around 11pm and we continued coloring the map the following morning. As of today, they are still counting votes in Michigan, so we are not finished with the project.

This has been the strangest and most demoralizing election of our times, but we did not get into that with our children. They are small enough not to know about the scandals surrounding the two candidates.

My husband and I are registered Republicans and we treasure Judeo-Christian values. We have friends who are Muslim, Hindu, atheist, agnostic, Catholic, Protestant, nondenominational, African American, Asian American, Native American and we even have Democratic friends. I am an immigrant.

We have a lot of respect for other people’s beliefs and value systems. We love this country deeply and treasure free markets and Capitalism. When one of my heroes, Dr. Ben Carson, decided to run for president on the Republican ticket, I was very excited. He had my vote from day one. Unfortunately, he did not get the numbers and endorsed Donald Trump. I stuck with my party based on that endorsement.

Like 18 million Americans, who were not thrilled by the tone of this election or their party’s candidate, I held my nose and voted. It was an exciting night, Election Night. I was glad it was finally over. It turns out, my husband and I were not the only people who knew this country was, in the words of Dr. Carson, like a train headed for the precipice.

We look forward to our visit to Nashville next year, when for the second year in a row our son will participate in TeenPact One Day – a seminar for children ages 8-12 held at the Capitol Building, which covers civics and government lessons.