As I work my way through the books listed in The Well-Educated Mind, all sorts of things go through my mind. Pride and Prejudice is one of those literary works that we should read at least once a decade. A teenager will experience this novel differently than a 25-year-old and a 35-year-old will see yet so many other things – new things – in this book. 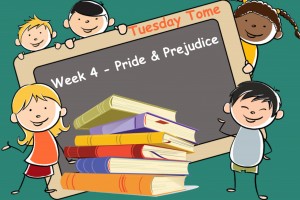 I do not recommend the movie with Keira Knightley, by the way. It it too hard to squeeze this literary gem into a two-hour film. Plus it’s just not done well. I saw this movie a long time ago and did not like it at all. After reading the novel last week, I watched bits of this movie on YouTube and disliked it even more.

I would recommend that, as you read the book, you watch the six episodes of the BBC production from 1995, which stars Colin Firth as Mr. Darcy. That Pride and Prejudice is well done. And if you really get inspired by it, go to YouTube and look for some of the clips which show their 10-year reunion and the memories they share from filming it, and from staying so true to Jane Austen’s witty and romantic text.

I liked this production because it used lines from the book for most of the dialogue. There is so much in the imagery, but you would have to read the book first to understand the subtleties of the movie production.

The only kiss in this six-episode film is between two married people, during the last five seconds of the movie. And yet, the romantic feelings building to it permeate the entire movie. The book of course feels differently. But you do get a sense that romance and money actuate the people in the book to do what they do.

You can get this book for free on Kindle, on Amazon.com. Also, you can watch the six-episode Pride and Prejudice for free with Amazon Prime. Who knows? Your local library might have it, as well. But nothing beats reading the book.

This novel gives the reader so much satisfaction. Everything gets resolved nicely in the end and everybody is happy. All except for Lady Catherine, but we are happy her scheme did not succeed. Personally, this book spoke to me in ways I did not expect – too personal to share. Who knows what it will say to you? I believe books speak differently to different people. That’s why we call it art.

One thought on “Tuesday Tome Week 4 – Pride and Prejudice”