The Pilgrim’s Progress is a Christian classic and an English literature classic. Published in 1679, it was written by John Bunyan while he was in prison for his faith. As an independent preacher, he bothered the established Church of England and they put him in prison for preaching differently. And yet he was able to focus and write this masterpiece. 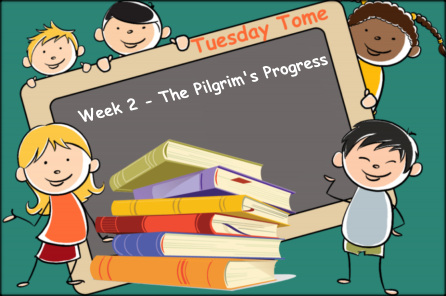 This book can easily be read in a week, though you might want to take longer because it feels like a devotional. I stopped in several places and meditated on the meaning of the names of the characters and how what happened to him happened to me at one point or another. I read it in four days.

Of course, the journey of a Christian from here to the hereafter is not as 1-2-3 as this book makes it sound. Spiritual matters do not always resolve in pretty situations. But nevertheless it remains one of the best books you could read in your life, especially if you are a Christian.

The story is told as an allegory, a dream, and the author assumes an omniscient voice. It’s interesting that in the 1600s, when religion and faith were the foundation of Western European countries and civilizations, authors wrote as if they were God – knowing everything, penetrating every character’s thought and feeling. As modernity happened and scientific discoveries put under scrutiny faith and religiosity, writers started knowing less and less about their own characters. It simply reflected a separation from the concept of God as the All-knowing, All-powerful Being.

But not so in Christian’s world. It bothered me that he left his wife and four children behind looking for the Celestial City, but, at least, it was a spiritual quest. Gulliver left his wife four times just to quench his wanderlust. So, I think I can forgive Christian for leaving his wife and children behind, especially knowing that, eventually, they come after him. Note to self: read the sequel, “Christiana’s Story.”

Two things that really spoke to me: (1) when he walked by the lions, he did not realize they were chained and could not get to him; and (2) he speaks of family holiness. There is something powerful in that phrase – not just personal holiness, but family holiness. The whole atmosphere around your home could be hallowed if you all made a conscientious effort to keep God in mind.

And “the lions are chained” became a way to encourage myself whenever the lions in my life start roaring. It is a reminder that no, they cannot devour me, they cannot touch me, although they sound pretty fierce.

This book really feels Protestant and godly. There is an atmosphere about it and the concepts it puts forth are ethereal and heavenly. I would not hesitate to say that Bunyan was inspired when he wrote it the way Handel was inspired when he wrote The Messiah. I read this book 20 years ago. I think we should all re-read this book more often than that.