It took me three days and several methods to teach my son subtraction with borrowing. Math has never been a tough subject for him. He understands place value and trading one ten for ten ones. He just did not understand why we did all the maneuvering around.

So I backtracked and showed him some cute videos on YouTube: this, this, and this. He thought the Khan Academy’s video on the subject was too dry and boring and still did not get it. I usually scoff at the idea of Sesame Street style teaching, but desperate situations require desperate measures. I knew I would stoop to this level just so my kid would get it. And then we can go back to our regularly scheduled programming, to use terminology from the oft-despised world of television.

43-26 shown with dimes and pennies; 10 pennies waiting on the side to be traded for a dime.

I got online and looked at some videos on how to teach subtraction with borrowing myself. Some of them bored me to tears, but I appreciated the efforts of all these math teachers out there who took the time to offer this online for free. Thank you.

In the process, I learned that borrowing is considered antiquated now as a term. We now say “regrouping.” Both terms are incomplete, in my book, because the operation involves borrowing first and then regrouping.

I also learned that Common Core advocates call this “granny math.” The way to do subtraction with regrouping under Common Core Standards is to count up to the nearest number that ends in a 0 or a 5, like giving change. Excuse me?

If that’s not a way to create a generation of dummies which can be easily controlled and manipulated by a technocratic state, I don’t know what is. What’s wrong with the old way? It teaches children to think. Ironically, Common Core advocates state the opposite. They claim their way of doing math is the way to get a child to think. I disagree.

I stumbled upon this controversy because of our math curriculum, Right Start Math, which delighted me in kindergarten and first grade. But, now on Level C, which roughly corresponds to second grade, I am not sure about it anymore. Their way of teaching subtraction is so different, it took me a bit to understand what it is I am trying to achieve with my son. Moving beads around on the abacus did not really help him understand subtraction.

So I reached for my supplemental curriculum, Math Mammoth, and worked my way through it for the past two months, skipping over things that I know my son knows. In the end, it was its author, Maria Miller, who came to my rescue with the pesky subtraction with regrouping. Her video really made sense to me as a teacher, and helped me back up and start all over with my son. 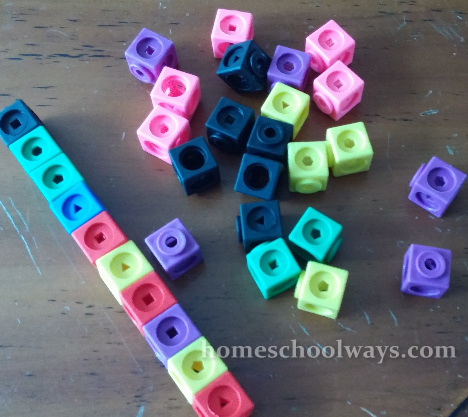 Math Linkcubes can also be used to help a child understand how a ten becomes ten ones.

Also, I read a comment online about showing dimes and pennies for it. Make up a number out of dimes in the tens columns and pennies in the ones column. Say, 34. You would need to allign three dimes and four pennies on the table. Now show another number, say 18. For that, you would need one dime and eight pennies. Now show the child you don’t have enough pennies in the number above (34) to subtract your eight pennies from the number below (18), because 4 < 8.

Do the trading by taking a dime from your three dimes in 34 and replacing it with 10 pennies to keep the same value. Now subtract from this new number: pennies from pennies, dimes from dimes. Have the child read the new number, which should be 16. Done.

My son finally got it, but what happened in the process was fun and funny. When I told him we were going to borrow a dime from the tens column, he started saying, “Ya starving, ya starving… and ya from Boston” with a Massachusetts accent. His sister, who was watching my dime and penny demonstration as well, chimed in. I had allowed both of them to see different subtraction with borrowing videos. The one they liked the most was Mr. DeMaio’s video with the two puppets and their pizza metaphor.

Amidst giggles and shouts of “ya starving,” we got subtraction with borrowing. Or regrouping. Or trading. Or carrying over. Whatever you want to call it. Just don’t call it “granny math,” because then I will send you to your room with your own copy of “10 Ways to Destroy the Imagination of Your Child” and will not let you come out until you have read it all.

One thought on “Subtraction with Borrowing”