Chapter 15 dealt with three things, all of them happening in the New World. First, we looked at the Wampanoag’s war against the English colonists, also known as King Philip’s war. Such a mess! It is one thing to inspire the children with stories of brave explorers who sailed across unknown seas in search of a shorter route to India. It’s another thing altogether to talk about the aftermath of such explorations and colonization attempts.

But history must be taught, no matter how painful and sad it may have been. Since history repeats itself, we want to make sure that we learn what happened in the past so that we may not repeat others’ mistakes. 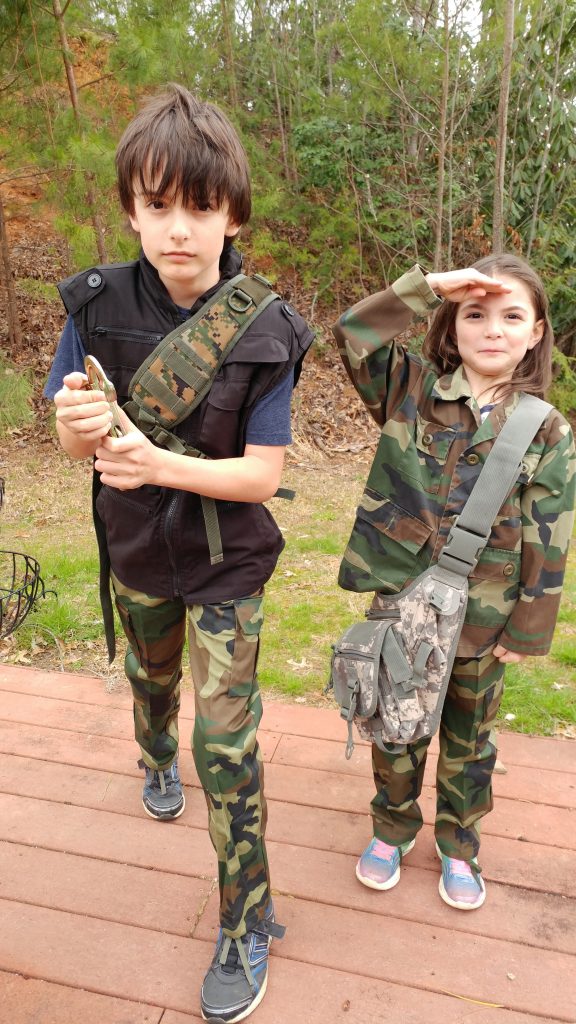 Having fun in camouflage outfits

The second story dealt with the French having trouble in New France, today’s Quebec. One trouble was the lack of women and the other was the attack of the Iroquois. Since we are vaguely making plans to visit Montreal and Quebec City one day, we made a mental note of Marie-Madeleine de Vercheres and her statue which we should definitely see.

King Louis XIV paid women to cross the ocean in order to live in New France, where they could meet lonely soldiers, settle down and have families together. Somebody should come up with a similar idea for the Chinese these days, but that is another history lesson for another time.

The third story was about William Penn’s holy experiment or the beginning of Pennsylvania. We talked about Quakers and I showed them the oat box – Quaker Oats – which has a man in his characteristic Quaker suit and hat on the label. We eat a lot of oatmeal for breakfast. The children are very familiar with that box. Now they know what the man represents.

My children are going through an army phase, so it was very easy to get them dressed in camo for this chapter’s project of blending in.