Chapter 34 or Martin Luther’s New Ideas is probably my favorite topic in medieval history. I love the Protestant Reformation and all that it entails. Luther is my favorite reformer, though I appreciate what each one has done for the cause. 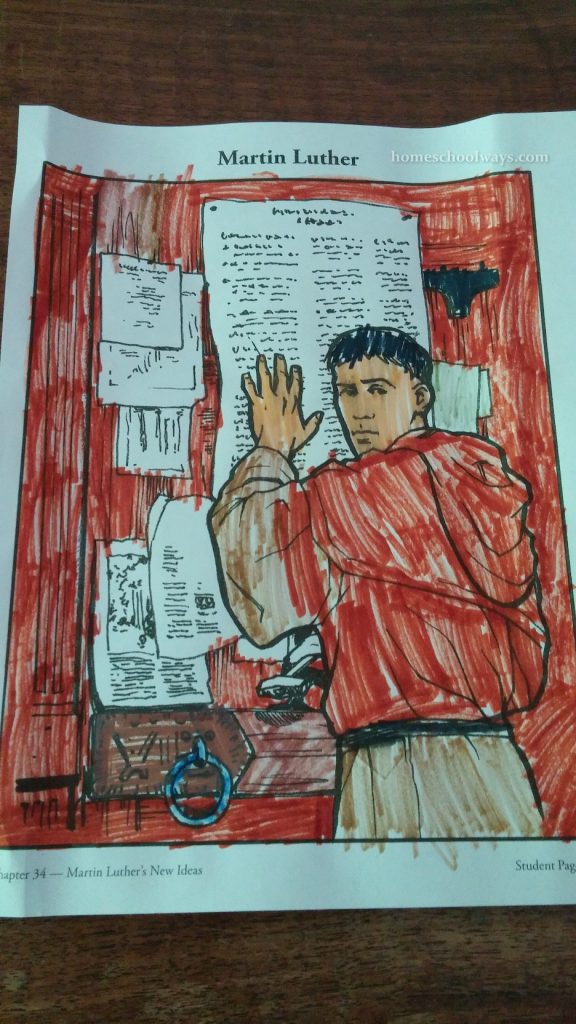 Martin Luther nailed his 95 theses on the church door in Wittenberg and the world was never the same.

We learned the basic facts through the first story. Then, through the second story, which dealt with Henry VIII, we learned how these new ideas coming from Germany could be taken too far when people are blinded by greed, jealousy, pride etc.

It was rather strange to talk to the kids about Henry’s six marriages and two beheaded wives. But I think Susan Wise Bauer did a good job in presenting the facts without descriptive, gratuitous violence. We just swiftly learned the facts and moved on.

If you have a hard time remembering which wife died, was divorced, or was beheaded, the chapter provides a simple rhyme to help with that.

I printed out a portrait of Martin Luther for them to color but showed them the portrait of Henry VIII. They both said they did not want to color him. He was too crazy. And I was not going to make my children color him anyway. But I wanted them to have a visual of him so that they may start recognizing him in history books and magazines.

The map work was smooth and then we did the craft page with the Tudor Family Tree.