Chapter 31 dealt with Christopher Columbus, Amerigo Vespucci and Ferdinand Magellan. What’s not to like? The kids loved it, I loved it. We pretty much stood by the world wall map we have in the living room and, as I read, we followed along the different routes these adventurers took throughout the XIV century. 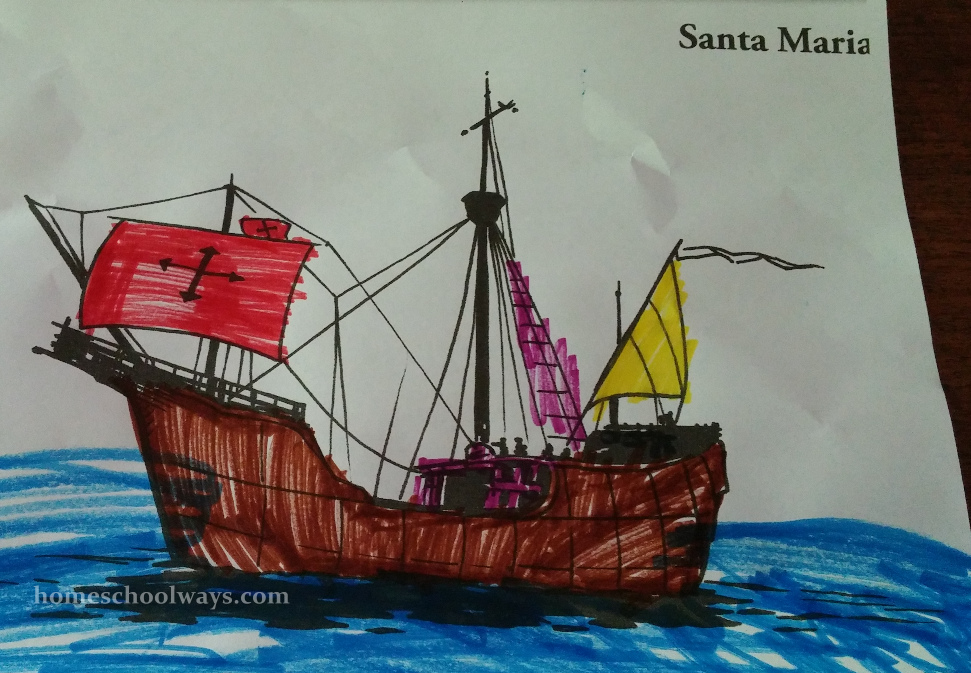 One of Columbus’ ships

These true stories of courage, ignorance, dreams of world supremacy, trade routes, and the overpowering desire for Indian spices really capture the imagination of small children and adults alike. I was riveted and I knew these stories already. It’s amazing to remember how little humanity knew about itself just five hundred years ago.

That’s why he became better known at the time than Christopher Columbus. Sure, Columbus landed in North America first. But for the next 10 years he honestly thought he discovered India.

Amerigo Vespucci (also an Italian) decided to travel the routes opened by Columbus’s voyages. But as Vespucci sailed up and down the American coast, he realized, “This is not India. This is a whole new continent.” And he wrote about his travels. More than Columbus.

When a cartographer put together a map of the world a few years later, he called the new continents America because he knew about Amerigo Vespucci. Vespucci wrote more about his travels. Period. Columbus wrote some, but not as much.

I told the kids about the Latin expression, “Verba volant, scripta manent.” Spoken words fly away, but what is written remains. Which is why I love publishing, online, offline and everywhere in between. Writing is paramount.

European explorers ate sweet potatoes for the first time as they landed in the New World.

We baked some sweet potatoes for our edible crafts, to remember how the European explorers ate such things for the first time once they landed in Bermuda. The map work was quick and easy and we even unscrambled the words about the different explorers. I had to write it down for them. They were tired by then and what really mattered for me was that they memorized the facts. This is not their writing curriculum.