We attended our first Spelling Bee and it was a lot of fun. My son got out in the third round, but he said he enjoyed himself and wanted to come back next year. As it is, he finished in the middle of the group, which is not bad for his first time and for being a third grader.

A Spelling Bee is simply a great experience in public speaking, recalling information you have learned, working under pressure, using your knowledge of phonics to tackle a new word, and thinking on your feet. I have written here before that vocabulary is the only proven predictor of future success. 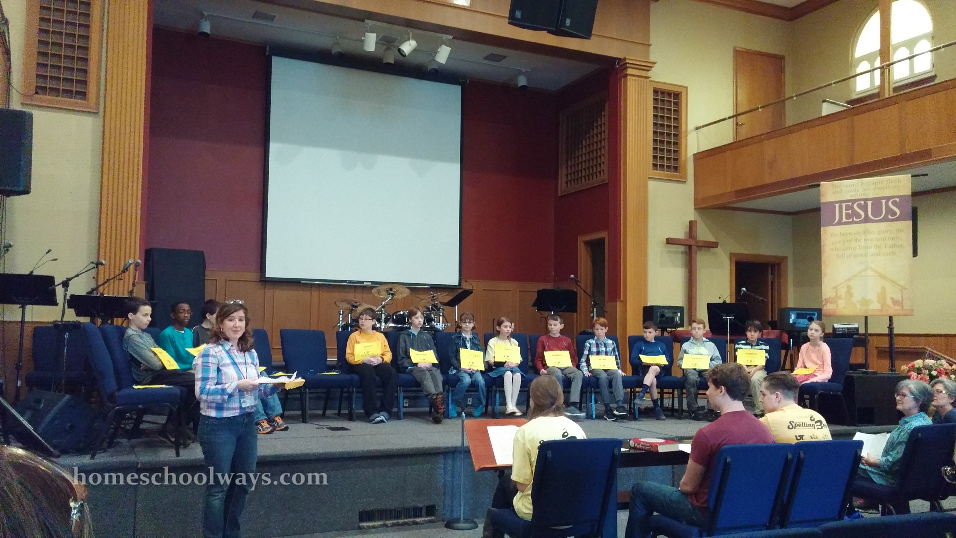 My son, second from the right, pays attention during the BHEA Spelling Bee in Maryville.

I was glad the organizers had prizes for all the children participating. Even though it was a good experience for all, receiving a goody bag as soon as they got off the stage took the sting out of the loss for many of these children.

There were some other special prizes for the three children who came in first, second and third, as there should be. I believe in rewarding effort and superior skill. But it was very nice that all children received a little something for the effort of signing up and showing up and humoring their moms. Yes, that would be me included!

This was the Blount Home Education Association (BHEA) Spelling Bee and it is considered “school level.” The winner goes straight to Regionals, which happen in Knoxville. The winner of Regionals goes to DC. So yeah, it would be a big deal to win the BHEA Spelling Bee one of these years.

We are just thankful that we got started with the experience. My daughter, who is in first grade, attended and enjoyed watching. She told me afterwards that she wanted to participate when she would be of the right age.

I was glad to see that they were OK with the pressure and did not think bad of the experience. On the contrary, they learned a lot from it and wanted to build on it in the future.

The Spelling Bee, which happened in a church in Maryville, TN, was attended by 13 brave children. A big thank you to the organizers, a team of moms and their teenagers, who have won the BHEA Spelling Bee in years past and have come really, really close to qualifying for the nationals. Hats off to you ladies for the hard work you put into this event and for giving our children a great learning experience!