Sometime in January, both my children had to spend 45 minutes in a private school for a practice test, when they were in first grade. I could sit in the back of the room as long as I was completely silent. Many of us parents chose to do so and I know we all learned a lot through the experience. 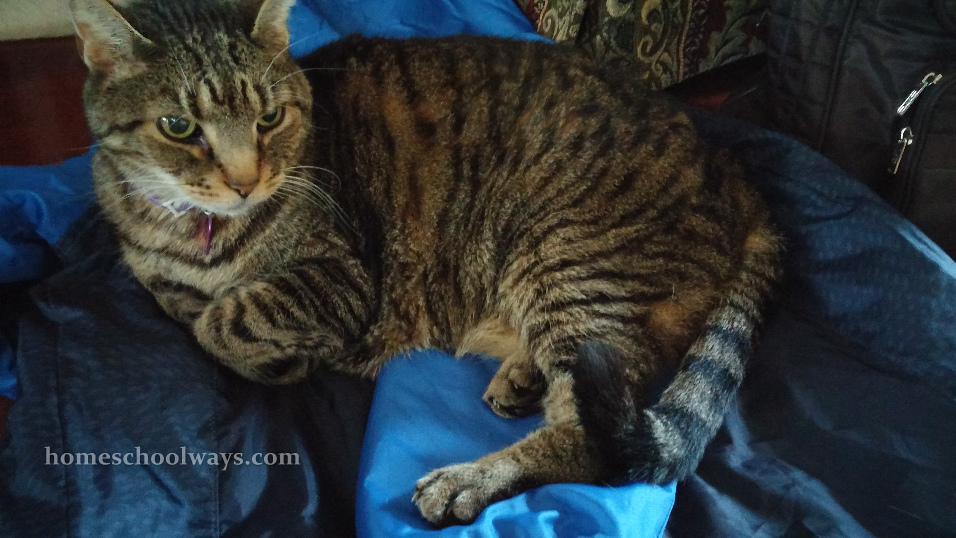 Our cat does not have to test. He just sits pretty on whatever jacket he can find on the floor.

The teacher up front read the test to the students question by question, explained how they are to think through the four answers given, and showed them on the board how to bubble in so that the computer reading the test results could pick it up.

This is a preparation for the actual test which happens in March. The practice test is optional and so is the actual test, in first grade. But we chose to do it with both our children. We think it is good practice for the coming years.

Here’s the thing about testing: we don’t do much of it at home, because we do not think education means teaching to the test. But we chose to test the children once a year in an official setting so that our minds may be at ease that they are doing well on standardized tests and that they are not lagging behind their peers.

During the day of the actual test in March, parents are not allowed in the room. But for the practice test in January, as above, we have that option.

In Tennessee, homeschoolers must register under an umbrella school and follow the guidelines of that particular place. The umbrella school we chose only starts testing in second grade, with this optional first grade test and a practice test two months prior.

They have noticed that children who first come to do a practice test in January experience more ease and less anxiety in March for the actual test, which makes perfect sense. Tests and competitions are part of life, whether we like it or not. Homeschoolers who avoid tests at all costs may regret it later on, although it is a tough decision if your child experiences extreme test anxiety.

Thankfully, my children are not that way. They have some butterflies before a test, but who doesn’t? I don’t believe in shielding children from responsibilities and tests and competing against themselves or the computer or other children. It’s not the real world. But I do believe in preparing them well for tests.