Recently, we received two of the seven Go Science DVDs (Series 2) from Library and Educational Services. What follows is a review of DVD 4 – Motion, Friction, Electricity, Light – and DVD 7 – Engineering, Design, and Flight – , as well as a general overview of this set and the experience my children had while watching.

Ben Roy, a science professor from the University of Tennessee in Chattanooga, recorded different science experiments for a children’s program on a Christian satellite TV station. Later on, he put them together in these DVDs.

The result is great because he had a live audience watching and participating and anticipating the result of the experiment (the scientific method at work). Children range from preschool age to tweens in his audience, which is pretty much the age recommended for these DVDs: 4-12. 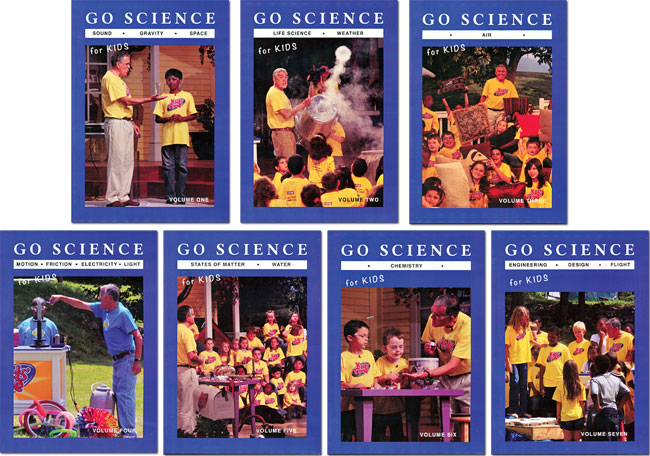 The titles are as follows:

DVD 5 – States of Matter and Water

The whole set costs $59.82. Each DVD costs $8.97. One must create an account with Library and Educational Services in order to take advantage of these whole-sale prices.

By the way, Library and Educational Services offers so many other products, you will probably refer to their site over and over again. I think it’s great that they offer these discounts to homeschoolers.

I have to tell you that once you turn these DVDs on, you cannot stop. I was going to do only 30 minutes at a time initially, but when I saw how much the children enjoyed it and how quickly time seemed to go by, I let them watch one whole DVD in one sitting. The next day, we watched the other one.

My four-year-old daughter enjoyed watching the DVDs right along her big brother, who is six. They made predictions, clapped, and shouted YESSS or NOOO when Ben Roy asked his studio audience a question. In that sense, watching the DVDs can be interactive.

Each experiment is a separate video clip, not longer than five minutes. I like that format because the children do not have time to get bored. Also, because it feels like you cover a lot of material (because you do!) but in less time.

The videos follow the same format, too, which helps with predictability and routine. Children like to know what to expect. By the third video, my children knew that the experiment was over and Mr. Roy was going to draw a spiritual lesson out of it. They started talking over him – they were more excited about things exploding, spilling, or breaking, than about the spiritual application. But that’s OK, they still caught some of what he was saying.

Mr. Roy ends every video bit with “You know, children, when you learn more about science, you learn more about the Creator, GOD!” If your children just get this sentence as a principle for their education, you have accomplished a great deal in your homeschooling efforts by watching these DVDs.

Even though I believe low-tech educational experiences are superior to the ones involving my children staring at a screen, I have to say these DVDs are a great addition to my homeschool. I can think of those low-energy days when I just can’t seem to get it together. I could pop one of these DVDs into the DVD player and cuddle up with my children (or stay away, if need be).

They have just been shown some amazing tricks (I mean, science experiments), I get some rest, and the voice of my conscience has been silenced because they are “doing school” and learning a lot. There is something to be said about delegating my children’s education to somebody else for one hour at a time, now and then.

But, first and foremost, these DVDs can be used as a science curriculum supplement. Also, if your child needs a cool Science Fair Project idea, you have plenty to choose from in these DVDs – for different levels of maturity and courage.